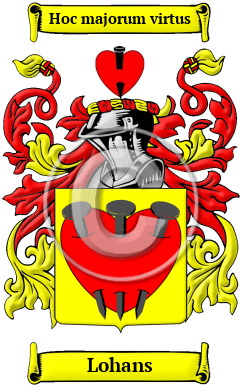 The surname Lohans comes from the original Irish sept name O Leoghain. Lohan sometimes been unusually mistranslated into Duck, the Irish word for duck being "lacha" which bears only a slight similarity to the original. [1]

Early Origins of the Lohans family

The surname Lohans was first found in County Westmeath (Irish: An Iarmhí) in the Irish Midlands, province of Leinster, where it belonged to the sept whose chiefs were lords of Gailenga Mor, now Morgallion. The annals tell the story of how the men of Teffia (County Meath) slew Cuan O Lothchain, the chief poet of King Malachy II, in 1024 and died miraculously as retribution. Maurice O'Loughan was Bishop of Kilmacduagh from 1254 to 1283. The prominent members of the O Leochain sept were driven across the river Shannon by the Anglo-Norman invasion.

Early History of the Lohans family

Another 41 words (3 lines of text) are included under the topic Early Lohans Notables in all our PDF Extended History products and printed products wherever possible.

Migration of the Lohans family

Some of the first settlers of this family name or some of its variants were: Patrick Loughan, who was recorded as a British alien in New York during the War of 1812; James Loughain, who was naturalized in Philadelphia in 1828; Wenifred Loughan, who settled in New Brunswick between 1843 and 1847.