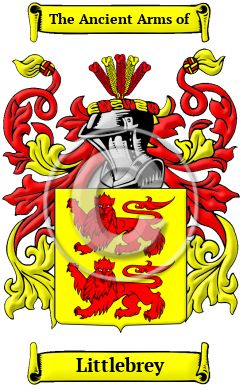 The Littlebrey surname is thought to be derived from a place name. Littlebury in Essex was recorded in the Domesday Book as "Litelbyria" manor and was owned by Ely Abbey from the ninth century.

Early Origins of the Littlebrey family

The surname Littlebrey was first found in West Essex, at Littlebury, a small village that dates back to Saxon times when it was first listed as Lylanbyrig c. 1000. The place name literally means "little fort or stronghold," from the Old English words "lytel" + "burh." [1] The parish church of Holy Trinity was built c. 1163 on the site of a Roman camp. Hence, conjecturally, the surname is descended from the tenant of the lands of Fillingham, held by Anskettle from Roger Poitou a Norman Baron who was recorded in the Domesday Book census of 1086.

Early History of the Littlebrey family

This web page shows only a small excerpt of our Littlebrey research. Another 120 words (9 lines of text) covering the years 1510, 1600, 1190, 1274, 1267, 1272 and 1487 are included under the topic Early Littlebrey History in all our PDF Extended History products and printed products wherever possible.

Another 41 words (3 lines of text) are included under the topic Early Littlebrey Notables in all our PDF Extended History products and printed products wherever possible.

Migration of the Littlebrey family

Some of the first settlers of this family name or some of its variants were: Thomas Littlebury, who came to Philadelphia in 1832.