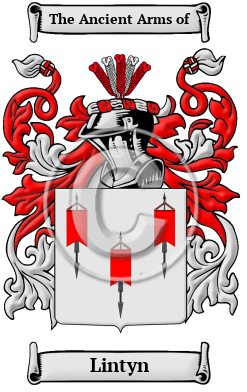 Irish surnames have had their original forms altered in many ways. Before being translated into English, Lintyn appeared as Mac Giolla Fhiondain, which refers to a descendant of a devotee of St. Fintan.

Early Origins of the Lintyn family

The surname Lintyn was first found in counties Armagh and Down (Irish:An Dún) part of the Province of Ulster, in Northern Ireland, formerly known as county St Mirren, where they were anciently known as the Mac Giolla Fhiondain, devotees of St. Fintan an ancient sept of Oriel,(roughly equivalent to Ulster,) and the clann being one of the founding septs of Northern Ireland.

Early History of the Lintyn family

This web page shows only a small excerpt of our Lintyn research. Another 94 words (7 lines of text) covering the year 1650 is included under the topic Early Lintyn History in all our PDF Extended History products and printed products wherever possible.

The archives that survive today demonstrate the difficulty experienced by the scribes of this period in their attempts to record these names in writing. Spelling variations of the name Lintyn dating from that time include McAlinden, McAlindan, McAlindon, Glindon, Lindon, Glendon, McLindon, MacLindon, MacAlindon, MacClendon, McClendon, McLinden, McGlindon, MacGlindon, McGlendon and many more.

More information is included under the topic Early Lintyn Notables in all our PDF Extended History products and printed products wherever possible.

Migration of the Lintyn family

The 18th century saw the slow yet steady emigration of Irish families to British North America and the United States. Those early Irish settlers that left their homeland were typically moderately well off: they were enticed by the promise of a sizable plot of land. However, by the 1840s, this pattern of immigration was gone: immigrants to North America were seeking refuge from the starvation and disease that the Great Potato Famine of that decade brought. The great numbers of Irish that arrived to the United States and the soon to be Canada were instrumental in their quick development as powerful industrial nations. An examination of early immigration and passenger lists uncovered many early immigrants bearing the name Lintyn: James McLinden arrived in Philadelphia Pennsylvania in 1768; Arthur McLindon arrived in Philadelphia in 1858; William McLindon arrived in Philadelphia in 1880.