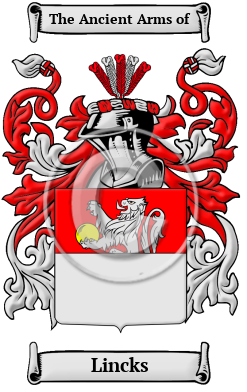 Austria is the homeland of the Lincks family. Originally, the Austrian people were known only by a single name. The process by which hereditary surnames were adopted in Austria is extremely interesting. The process took place during the Middle Ages when people began to assume an extra name to avoid confusion and to further identify themselves. Often they adopted names that were derived from nicknames.

Early Origins of the Lincks family

The surname Lincks was first found in Austria, where the name became noted for its many branches within the region, each house acquiring a status and influence which was envied and enrolled by the princes of the region. Chronicles mention one Francze Lynke (Lynkehand) of Liegnitz in 1397, and one Herman Lynkfuss of Sorau in 1381. The literal meaning of the name was "left-handed," or even "one who is clumsy or awkward," but was taken on by numerous branches of the family. They became a power unto themselves, and were elevated to the ranks of nobility as they grew wealthier and more influential.

Early History of the Lincks family

One can encounter great variation in the spelling of surnames: in early times, spelling in general, and thus the spelling of names was not yet standardized; and later, spellings would change with branching and movement of families. Variations of the name Lincks include Linker, Lincker, Link, Linke, Linke, Lynker, Lyncker, Lynke, Linkhand, Lyncke and many more.

During this period prominent bearers of the name Lincks were Johann Heinrich Linck the elder (1674-1734), a German pharmacist and naturalist; and his son, Johann Heinrich Linck the younger (1734-1807); and Conrad Linker, the Lord of Daeberhausen, who was made a Baron in 1658. This highly educated man filled the position of emissary to many European courts, and...
Another 57 words (4 lines of text) are included under the topic Early Lincks Notables in all our PDF Extended History products and printed products wherever possible.

Migration of the Lincks family

After the First World War, Austria became a republic. The Treaty of Versailles broke up the empire in 1919 and many of the Sudeten Germans were incorporated into the new nation of Czechoslovakia. In the 20th century, many Austrians migrated to other parts of Germany or Europe, as well as to North America. In the United States, the majority of settlers landed in Philadelphia, and moved on to Ohio, Texas, Illinois, California, New York, and Maryland. Many German settlers also migrated to Canada, particularly Ontario and the Prairies. Amongst the settlers in North America with this distinguished name Lincks were Jacob Link, who came to Philadelphia in 1749. Christian Link came in 1753; Frederick Link in 1772; and Michael Link in 1751. Numerous bearers of this name came to New York in 1875.