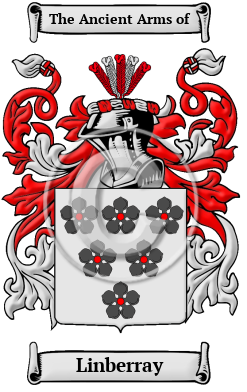 The surname Linberray is of English origin. It is derived from "Limbury," the name of a hamlet in the parish of Luton, Bedfordshire.

Early Origins of the Linberray family

The surname Linberray was first found in Bedfordshire (Old English: Bedanfordscir), located in Southeast-central England, formerly part of the Anglo-Saxon kingdom of Mercia, where the hamlet of Limbury is located. The first listing of the place was found in the late 9th century as Lygeaburg. [1] The Icknield Way, a Roman road passes though Limbury. The place name literally means "stronghold on the River Lea." [1] The Saxon influence of English history diminished after the Battle of Hastings in 1066; the language of the courts was French for the next three centuries and the Norman ambience prevailed. The most prominent Saxon surnames survived, however, and the family name Linberray was first referenced in the 12th century, when Gerard de Linberga was recorded in the Pipe Rolls of Wiltshire in 1130.

Early History of the Linberray family

This web page shows only a small excerpt of our Linberray research. Another 156 words (11 lines of text) covering the years 1130, 1212, 1605 and 1666 are included under the topic Early Linberray History in all our PDF Extended History products and printed products wherever possible.

More information is included under the topic Early Linberray Notables in all our PDF Extended History products and printed products wherever possible.

Migration of the Linberray family