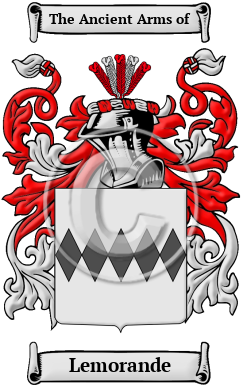 The name Lemorande is a nickname type of surname, derived from the Old French word "more," meaning "dark skinned," which in turn derives from the Phoenician "mauharim," meaning "eastern." This name was applied to Moors and other people with dark complexions. [1] Surnames evolved during the Middle Ages when people began to assume an extra name to avoid confusion and to further identify themselves. Surnames derived from nicknames were quite common; they usually reflected physical characteristics or other attributes of the first person.

Early Origins of the Lemorande family

The surname Lemorande was first found in Burgundy (French: Bourgogne), an administrative and historical region of east-central France, where this eminent family has held a family seat since ancient times.

Early History of the Lemorande family

Notable amongst the family at this time was Jean-Baptiste Moreau (ca. 1656-1733), a French composer of the baroque period; Jacob Nicolas Moreau of Burgundy, born in 1717; Moreau of Saint-Rémy (1750-1819), a representative of Martinique at the Constituent Assembly; Pierre-Jean...
Another 40 words (3 lines of text) are included under the topic Early Lemorande Notables in all our PDF Extended History products and printed products wherever possible.

Migration of the Lemorande family