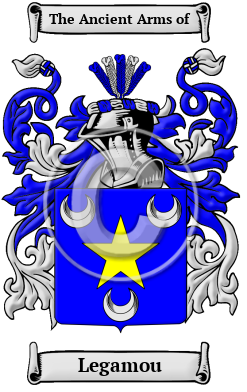 Early Origins of the Legamou family

The surname Legamou was first found in Provence where this illustrious family held a family seat from ancient times.

Early History of the Legamou family

Notable amongst the names at this time was Jean-Pierre Camus de Pontcarré (1584-1652), a French bishop, preacher, and author of works of fiction and spirituality. Étienne Le Camus (1632-1707), was a French cardinal, son of Nicolas le Camus, a state councillor. Camus Cognac is a brand of cognac that has been produced by five generations of the Camus family, since 1863 when Jean-Baptiste Camus organized a group of producers to sell cognac under the brand 'La Grande Marque'. Sébastien Le Camus (ca. 1610-1677) was a French composer...
Another 85 words (6 lines of text) are included under the topic Early Legamou Notables in all our PDF Extended History products and printed products wherever possible.

Migration of the Legamou family

Some of the first settlers of this family name or some of its variants were: Antoine Camus, aged 41; settled in Louisiana in 1719.