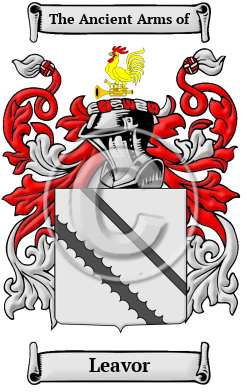 In ancient Anglo-Saxon England, the ancestors of the Leavor surname lived in the township of Great Lever in Lancashire as well as in Little Lever the chapelry in the parish of Bolton in Lancashire. The Leavor family were industrialists and millers, perhaps giving rise to the modern city of Liverpool, from their own Leaver's Port.

Early Origins of the Leavor family

The surname Leavor was first found in Lancashire at Little Lever, now a large village in the Metropolitan Borough of Bolton in Greater Manchester. Great Lever, a township nearby "was long held by the family of Lever, but in the 6th year of Edward IV., Sir Rauff Assheton, Knt., sued out a 'write of right of warde' against Roger Lever, for the recovery of the manor, and obtained judgment against him at the assizes of Lancaster. Lever, however, with a number of dependants of his name, and a large concourse of persons, many of whom had been outlawed, riotously broke into Lancaster Castle, and carried off the record of recovery. Sir Rauff complaining of this outrage to the two houses of parliament, they ordained that the copy of the record which was annexed to his petition should be of the same force and efficacy as the original; and the justices thereupon ordered execution to issue, and reinstated him in the possession, which, notwithstanding, was not undisturbed until some time after. " [1]

Early History of the Leavor family

This web page shows only a small excerpt of our Leavor research. Another 86 words (6 lines of text) covering the years 1521, 1577, 1551 and 1553 are included under the topic Early Leavor History in all our PDF Extended History products and printed products wherever possible.

It is only in the last few hundred years that the English language has been standardized. For that reason, early Anglo-Saxon surnames like Leavor are characterized by many spelling variations. As the English language changed and incorporated elements of other European languages, even literate people changed the spelling of their names. The variations of the name Leavor include: Lever, Leaver, Leyver and others.

Another 39 words (3 lines of text) are included under the topic Early Leavor Notables in all our PDF Extended History products and printed products wherever possible.

Leavor migration to the United States +

Many English families tired of political and religious strife left Britain for the new colonies in North America. Although the trip itself offered no relief - conditions on the ships were extremely cramped, and many travelers arrived diseased, starving, and destitute - these immigrants believed the opportunities that awaited them were worth the risks. Once in the colonies, many of the families did indeed prosper and, in turn, made significant contributions to the culture and economies of the growing colonies. An inquiry into the early roots of North American families has revealed a number of immigrants bearing the name Leavor or a variant listed above:

Leavor Settlers in United States in the 17th Century