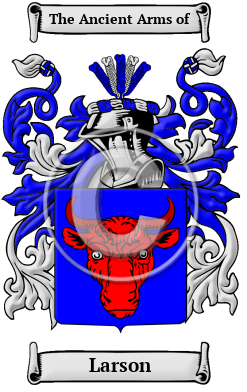 The origin of the distinguished Larson family can be traced to the historic Scandinavian country of Sweden. The surname Larson is derived from the personal name Lars, which is a pet form of the name Lawrence. This name is in turn derived from the Latin name Laurentius, which literally means man from Laurentium, a town in Italy named for its laurels or bay trees. The popularity of this name in medieval Europe is due to the exploits of a saint who was martyred at Rome in the 3rd century. The suffix -sen and its variants are translatable as son of.

Larson migration to the United States +

Larson Settlers in United States in the 19th Century

Larson Settlers in United States in the 20th Century

Larson Settlers in New Zealand in the 19th Century

Historic Events for the Larson family +

Suggested Readings for the name Larson +