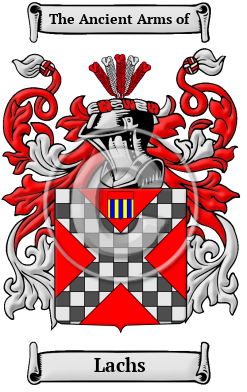 Early Origins of the Lachs family

The surname Lachs was first found in Franconia, where this family name became a prominent contributor to the development of the district from ancient times. Chronicles first mention "Heinrich in der lachun" in 1280 in Wuerttemberg, "Lachenman" in 1409 in Reutlingen, Burkhart Lachner of Freiburg in 1434, and by 1452 the variation "Lachenmair" was taken on in Leutkirch. "An der Lache" meant literally "by the pond." Always prominent in social affairs, the name became an integral part of that developing region as they emerged to form alliances with other families within the feudal system.

Early History of the Lachs family

One can encounter great variation in the spelling of surnames: in early times, spelling in general, and thus the spelling of names was not yet standardized; and later, spellings would change with branching and movement of families. Variations of the name Lachs include Lach, Lache, Lacher, Lachner, Lachemann, Lachmann, Lachman, Lachenmann, Lachenmaier and many more.

Prominent among members of the name Lachs in this period include Karl Konrad Lachmann (1793-1851), who was one of the true pioneers of the study of Germanic philology, doing ground-breaking work on mediaeval epics and troubadours. He also wrote poetry and published...
Another 42 words (3 lines of text) are included under the topic Early Lachs Notables in all our PDF Extended History products and printed products wherever possible.

Migration of the Lachs family

Thousands of German settlers came to North America between the mid-17th and mid-20th centuries. The hardships of the long voyage were balanced by the opportunity to escape poverty and religious persecution. The descendents of these settlers still populate the states of Pennsylvania, Texas, New York, Illinois, and California. Many also live in Ontario and the prairie provinces of Canada. An inquiry into the early roots of North American families has revealed a number of immigrants bearing the name Lachs or a variant listed above: Mark Lachman, who arrived in Philadelphia in 1774. Martin Lachner and Vite Lachner came to Georgia in 1741; G.C. Lachenmayer came to Philadelphia in 1798.