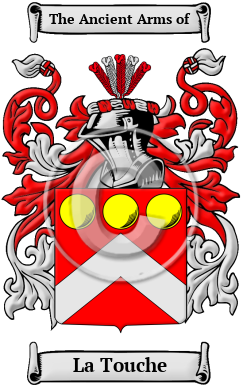 The surname La Touche was first found in Rhine Valley, where the family has been a prominent family for centuries, and held a family seat with domains, estates and manors. The family were well established in the region of Strasburg north to the coast and several members of the family distinguished themselves through their contributions toward the community and their religious activities. The La Touche family were from Blesois, between Blois and Orleans, of noble birth and possessing many estates. They were rewarded with lands, titles and letters patent confirming their nobility.

This web page shows only a small excerpt of our La Touche research. Another 118 words (8 lines of text) covering the years 179 and 1797 are included under the topic Early La Touche History in all our PDF Extended History products and printed products wherever possible.

More information is included under the topic Early La Touche Notables in all our PDF Extended History products and printed products wherever possible.

Migration of the La Touche family to Ireland

Some of the La Touche family moved to Ireland, but this topic is not covered in this excerpt.
Another 36 words (3 lines of text) about their life in Ireland is included in all our PDF Extended History products and printed products wherever possible.

La Touche Settlers in Canada in the 17th Century

La Touche Settlers in Canada in the 18th Century