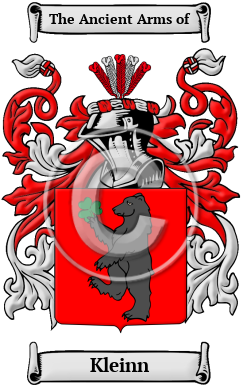 The name Kleinn comes from the German province known as the Rhineland. In pre-medieval times, the German people used only one name, but as the population increased, hereditary surnames became necessary for people to maintain unique identities. Kleinn is a nickname surname, a style of name based on an eke-name, or added name, that described a characteristic of its original bearer. Kleinn is a name for a small or short person deriving its origin from the German word "klien," which means "small."

Early Origins of the Kleinn family

The surname Kleinn was first found in the Rhineland, where the name came from humble beginnings but gained a significant reputation for its contribution to the emerging mediaeval society. It later became more prominent as many branches of the same house acquired distant estates and branches, some in foreign countries, always elevating their social status by their great contributions to society.

Early History of the Kleinn family

One can encounter great variation in the spelling of surnames: in early times, spelling in general, and thus the spelling of names was not yet standardized; and later, spellings would change with branching and movement of families. Variations of the name Kleinn include Klein, Kleinn, Kleine, Kleinne, Kleyn, Kleynn, Kline, Clein, Clein, Cline, Kleiner, Klinertz and many more.

Notables with the name Kleinn during this period were Daniel Klein (1609-1666), Lutheran pastor and scholar from Tilsit, Duchy of Prussia; and Felix Klein (1849-1925), who was an important German mathematician, founder of the institute of mathematics in Goettingen, and very influential...
Another 41 words (3 lines of text) are included under the topic Early Kleinn Notables in all our PDF Extended History products and printed products wherever possible.

Migration of the Kleinn family

Hundreds of thousands of Europeans, including many Rhinelanders, made the voyage to North America between the 17th and 20th centuries. It was an escape from religious persecution and poverty and also an opportunity for people to start over and own their own land. Most landed at Ellis Island, off New York before moving on to the states of Pennsylvania, Ohio, Texas, Illinois, and California. Some also landed in Canada and settled in Ontario, while others headed west to the prairie provinces. A study of passenger and immigration lists has shown a number of people bearing the name of Kleinn, or one of its variants, reaching North America shores very early: Uldrich Klein, who was the first Klein to come to America: he arrived in New York City in 1641 with his wife Afje Pieters. A wave of Kleins then followed in 1709.