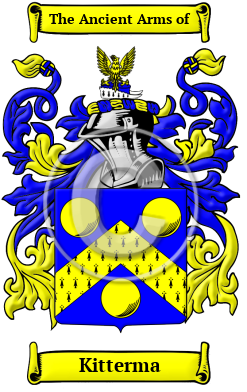 The ancestors of the bearers of the Kitterma family name are thought have lived in ancient Anglo-Saxon England. They were first found in Kidderminster, a village in Worcestershire. The place-name was recorded as Chideminstre in the Domesday Book, [1] which was compiled in 1086, and as Kedeleministere in 1154. The place-name is derived from the Old English personal name Cydela, and the Old English word mynster, which meant monastery. The place-name as a whole means "monastery of a man called Cydela." The surname means "one who came from Kidderminster." [2]

Early Origins of the Kitterma family

The surname Kitterma was first found in Worcestershire at Kidderminster. "At the time of the Conquest this was a royal manor, and it continued so until the reign of Henry II., when it passed into the hands of various possessors, of whom Waller, the poet, was subsequently one." [3]

Early History of the Kitterma family

Until quite recently, the English language has lacked a definite system of spelling rules. Consequently, Anglo-Saxon surnames are characterized by a multitude of spelling variations. Changes in Anglo-Saxon names were influenced by the evolution of the English language, as it incorporated elements of French, Latin, and other languages. Although Medieval scribes and church officials recorded names as they sounded, so it is common to find one person referred to by several different spellings of his surname, even the most literate people varied the spelling of their own names. Variations of the name Kitterma include Kittermaster, Kidderminster, Kiddermaster, Kiddiminstre, Keedomister, Kederminster, Kidiministre, Kidiminstre, Kytermyster and many more.

Distinguished members of the family include Richard Kedermyster or Kyderminstre (d. 1531?), Abbot of Winchcomb, Gloucestershire, probably a native of Worcestershire. "At the age of fifteen he was admitted into the Benedictine monastery of Winchcomb; four years later he was sent to Gloucester College, Oxford, where the monastery owned an apartment called Winchcomb Lodgings; after remaining there for three years and a half he was summoned home, and by the interest of his patron, John Twynning, the abbot of Winchcomb, was made ‘scholar or pastor’ of the monastery. On Twynning's death in 1487, he was elected lord...
Another 96 words (7 lines of text) are included under the topic Early Kitterma Notables in all our PDF Extended History products and printed products wherever possible.

Migration of the Kitterma family

Searching for a better life, many English families migrated to British colonies. Unfortunately, the majority of them traveled under extremely harsh conditions: overcrowding on the ships caused the majority of the immigrants to arrive diseased, famished, and destitute from the long journey across the ocean. For those families that arrived safely, modest prosperity was attainable, and many went on to make invaluable contributions to the development of the cultures of the new colonies. Research into the origins of individual families in North America revealed records of the immigration of a number of people bearing the name Kitterma or a variant listed above: Hugh Kiddermaster, who arrived in Virginia in 1628; Anthony Kittermaster, who was on record in Ontario in 1871; and Albert Kittermaster, also on record in Ontario in 1871..