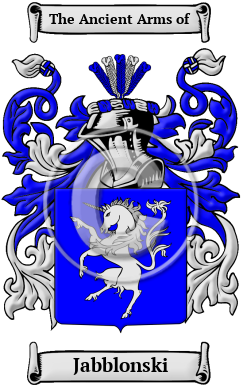 Early Origins of the Jabblonski family

The surname Jabblonski was first found in East Prussia and Pomerelna, where the name emerged in mediaeval times as one of the notable families in the western region. From the 13th century onwards the surname was identified with the great social and economic evolution which made this territory a landmark contributor to the development of the nation. The Jabblonski surname was born by five Polish noble families who were septs of the clans Boncza, Dabrowa, Jasienczyk, Samson, and Topor. Nobles bearing this name first appear in records around 1454 at Kiew and Varsoive.

Early History of the Jabblonski family

Prominent among those of the name Jabblonski in this period were Johann Theodor Jablonski (1654-1731), a German educator and lexicographer who wrote under the name Pierre Rondeau...
Another 27 words (2 lines of text) are included under the topic Early Jabblonski Notables in all our PDF Extended History products and printed products wherever possible.

Migration of the Jabblonski family