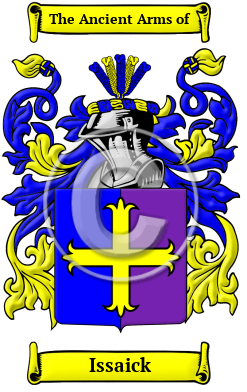 The name Issaick has a rich and ancient history. It is an Anglo-Saxon name that was originally derived from the baptismal name Isaac. The surname Issaick referred to the son of Isaac which belongs to the category of patronymic surnames. The name is derived from the Hebrew word "yishaq" meaning "laughter." [1]

Early Origins of the Issaick family

Early History of the Issaick family

Before English spelling was standardized a few hundred years ago, spelling variations of names were a common occurrence. Elements of Latin, French and other languages became incorporated into English through the Middle Ages, and name spellings changed even among the literate. The variations of the surname Issaick include Isaacs, Isaac, Isaack, Isaacson, Izacke and others.

Notables of the family at this time include John Isaac of Bekesbourne, Sheriff of Kent in 1460. Henry Isaacson (1581-1654), was an English theologian and chronologer, born in the parish of St. Catherine, Coleman Street, London, in September 1581, and was the eldest son of Richard Isaacson. "He appears to have been educated under the care of Bishop Lancelot Andrewes, by whom he was sent to Pembroke Hall...
Another 68 words (5 lines of text) are included under the topic Early Issaick Notables in all our PDF Extended History products and printed products wherever possible.

Migration of the Issaick family