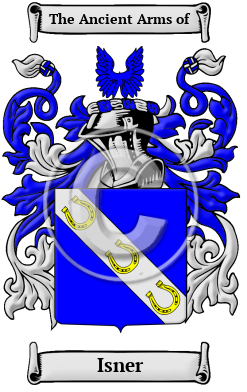 The name Isner originated in the German speaking Austrian Empire, which was primarily located in the Danube River Basin. Surnames that identified the bearer by occupation, like Isner, became common in Germany after the 12th century. Isner is a name for a person who was a iron worker or iron seller.

Early Origins of the Isner family

The surname Isner was first found in Austria, where the name was closely identified in early mediaeval times with the feudal society which would become prominent throughout European history. The family would later emerge as nobility with great influence, having many distinguished branches, and become noted for its involvement in social, economic and political affairs. Ancient chronicles first mention one "Walther der Isiner" in the year 1272.

Early History of the Isner family

This web page shows only a small excerpt of our Isner research. Another 142 words (10 lines of text) covering the years 1641, 1706, 1712, 1773, and 1867 are included under the topic Early Isner History in all our PDF Extended History products and printed products wherever possible.

One can encounter great variation in the spelling of surnames: in early times, spelling in general, and thus the spelling of names was not yet standardized; and later, spellings would change with branching and movement of families. Variations of the name Isner include Eisner, Aisner, Eissner, Aissner, Eisener, Eisnert, Eisen, Aisener, Isener, Isner, Issner and many more.

During this period prominent bearers of the name Isner were Kurt Eisner (1867-1919), who was a German political journalist of Jewish descent. He took a prominent part in the...
Another 29 words (2 lines of text) are included under the topic Early Isner Notables in all our PDF Extended History products and printed products wherever possible.

Migration of the Isner family

After the First World War, Austria became a republic. The Treaty of Versailles broke up the empire in 1919 and many of the Sudeten Germans were incorporated into the new nation of Czechoslovakia. In the 20th century, many Austrians migrated to other parts of Germany or Europe, as well as to North America. In the United States, the majority of settlers landed in Philadelphia, and moved on to Ohio, Texas, Illinois, California, New York, and Maryland. Many German settlers also migrated to Canada, particularly Ontario and the Prairies. Amongst the settlers in North America with this distinguished name Isner were Carel Eisner, who arrived in Philadelphia in 1732. Melcher Eisnert landed in Philadelphia in 1753. Nicolas Eisen settled in Texas in 1854; while Moritz Eisner came to Philadelphia in 1873..