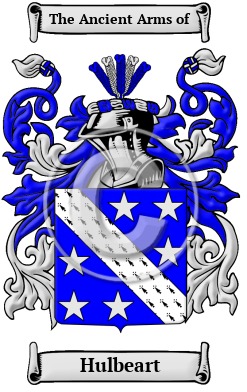 Hulbeart is one of the many names that the Normans brought with them when they conquered England in 1066. The name Hulbeart came from the Old English given name Holbert. Holbert is thought to be a corruption of the Old English personal name Holdbearht, which is composed of the elements hold, which means friendly, and berht, which means bright. [1] The variant Holberton is by extension derived from "holbert" + "tun" and claims Holberton, (Holbeton) Devon as its founding. This parish dates back to 1229 when it was known as Holbouton and literally meant "farmstead in the hollow bend." [2]

Early Origins of the Hulbeart family

The surname Hulbeart was first found in Wiltshire where they held a family seat as Lords of the Manor. This distinguished family held estates at Corsham and Wooten Basset in Wiltshire. At the time of the taking of the Domesday Book in 1086, a census initiated by Duke William of Normandy after his conquest of England in 1066, these lands were held by Miles Crispin, a powerful tenant-in-chief. Conjecturally, the Hulberts were descended from a Norman noble who held his lands from Miles Crispin. Corsham was the King's Land, but St. Stephen of Caen held the Church.

Early feudal rolls provided the king of the time a method of cataloguing holdings for taxation, but today they provide a glimpse into the wide surname spellings in use at that time. By example, the Latin form, Holbertus, was listed in the Archaelogia Cantiana with no date. William and John Holdebert were both listed in Warwickshire in the Pipe Rolls of 1205 and in the Assize Rolls of 1219 in Yorkshire. [3]

Early History of the Hulbeart family

This web page shows only a small excerpt of our Hulbeart research. Another 75 words (5 lines of text) covering the years 1530, 1660, 1680 and 1530 are included under the topic Early Hulbeart History in all our PDF Extended History products and printed products wherever possible.

It is only in the last few hundred years that the English language has been standardized. For that reason, Anglo-Norman surnames like Hulbeart are characterized by many spelling variations. Scribes and monks in the Middle Ages spelled names they sounded, so it is common to find several variations that refer to a single person. As the English language changed and incorporated elements of other European languages such as Norman French and Latin, even literate people regularly changed the spelling of their names. The variations of the name Hulbeart include Hulbert, Hulbirt, Hulbat, Hulbart, Houlbert, Houlbart, Hullbert and many more.

More information is included under the topic Early Hulbeart Notables in all our PDF Extended History products and printed products wherever possible.

Migration of the Hulbeart family

Faced with the chaos present in England at that time, many English families looked towards the open frontiers of the New World with its opportunities to escape oppression and starvation. People migrated to North America, as well as Australia and Ireland in droves, paying exorbitant rates for passages in cramped, unsafe ships. Many of the settlers did not make the long passage alive, but those who did see the shores of North America were welcomed with great opportunity. Many of the families that came from England went on to make essential contributions to the emerging nations of Canada and the United States. Some of the first immigrants to cross the Atlantic and come to North America carried the name Hulbeart, or a variant listed above: Edward Hulbert who settled in Virginia in 1680; Martha Hulbert settled in Virginia in 1660; H.M. Hulbert settled in San Francisco Cal. in 1850; followed by E.B. Hulbert in 1852.