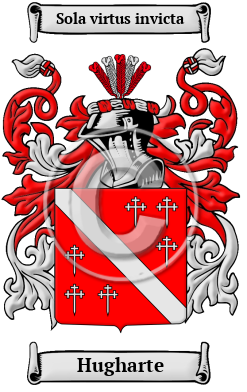 The generations and branches of the Hugharte family share a name that has its roots in the ancient Anglo-Saxon culture of Britain. The name Hugharte comes from the Old French name Huard or the Old German name Howard. The former name is derived from the Old German name Hugihard, which literally means heart-brave. The latter name, which is also spelled Howart, is a cognate of the Old Norse name Haward and means high or chief warden.

Occasionally, the surname Hugharte may have been applied to someone who worked at a dairy farm at which female sheep were kept. In this case, the derivation is from the Old English words eowu, which means ewe, and hierde, which means herd.

Early Origins of the Hugharte family

The surname Hugharte was first found in Norfolk, where one of the first records of the family was Elwin le Heyvard, who was listed in the Hundredorum Rolls of 1273. The same rolls listed Alice le Heyward in Huntingdonshire and Geoffrey le Hayward in Cambridgeshire. Later, William Heyward or Howard was Sheriff of Norwich, Norfolk in 1657. [3]

Early History of the Hugharte family

Until quite recently, the English language has lacked a definite system of spelling rules. Consequently, Anglo-Saxon surnames are characterized by a multitude of spelling variations. Changes in Anglo-Saxon names were influenced by the evolution of the English language, as it incorporated elements of French, Latin, and other languages. Although Medieval scribes and church officials recorded names as they sounded, so it is common to find one person referred to by several different spellings of his surname, even the most literate people varied the spelling of their own names. Variations of the name Hugharte include Howard, Howerd and others.

Notables of the family at this time include Thomas Howard, 2nd Duke of Norfolk (1443-1524) and 1st Earl of Surrey, who fought for King Richard III at the Battle of Bosworth Field in 1485; Catherine Howard (circa 1520-1542), a cousin of Anne Boleyn and the 5th wife of Henry VIII, executed in 1542; Alethea Howard, 13th Baroness Furnivall, Countess of Arundel (1585-1654) wife of Thomas Howard, 21st Earl of Arundel; Thomas Howard, 1st Earl of Berkshire (1587-1669), an English politician who sat in the House of Commons; Charles Howard, 2nd Earl...
Another 91 words (6 lines of text) are included under the topic Early Hugharte Notables in all our PDF Extended History products and printed products wherever possible.

Migration of the Hugharte family to Ireland

Some of the Hugharte family moved to Ireland, but this topic is not covered in this excerpt.
Another 87 words (6 lines of text) about their life in Ireland is included in all our PDF Extended History products and printed products wherever possible.

Migration of the Hugharte family