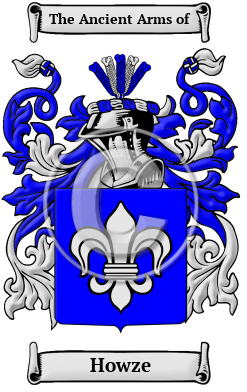 The ancestors of the Howze family come from the ancient duchys and dukedoms that eventually became Germany. The family name comes from throughout the German territories, deriving from one of several places named Hausen.

Early Origins of the Howze family

The surname Howze was first found in Germany, where the name Hauser emerged in mediaeval times as one of the notable families of the region. From the 13th century the surname was identified with the great social and economic evolution which made this territory a landmark contributor to the development of the nation.

Early History of the Howze family

One can encounter great variation in the spelling of surnames: in early times, spelling in general, and thus the spelling of names was not yet standardized; and later, spellings would change with branching and movement of families. Variations of the name Howze include Hauser, Hausser, Hauzer, Haueser, Howser, Howzer and many more.

Notables of the time with the name Howze included Miska Hauser, a famous Hungarian violinist, born 1822 in Pressburg, received his musical education in Vienna, under Bohm and Mayseder. When only twelve years of age he made a tour through the world. In 1840 he travelled through Germany, Sweden, Norway, and Russia...
Another 51 words (4 lines of text) are included under the topic Early Howze Notables in all our PDF Extended History products and printed products wherever possible.

In the United States, the name Howze is the 7,204th most popular surname with an estimated 4,974 people with that name. [1]

Howze migration to the United States +

Investigation of immigration and passenger lists has revealed a number of people bearing the name Howze:

Howze Settlers in United States in the 18th Century