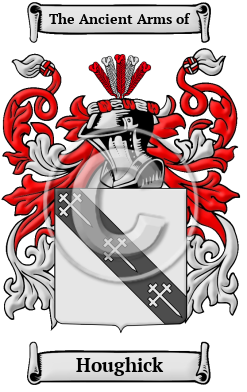 Early Origins of the Houghick family

The surname Houghick was first found in North Yorkshire at Bridge Hewick, a village and civil parish in the Harrogate district. The village dates back to the Domesday Book of 1086 when it first listed as Heawic. [1] Literally the place name is derived from the Old English "brycg" for "at the bridge" and "heah+wic", collectively meaning a "high or chief dairy-farm." [2] Copt Hewick is a village and civil parish also in the Harrogate district and both places' history are intertwined. The earliest record the latter village was found in 1208 when it was listed as Coppedehaiwic, while the former village was later listed as Hewik atte brigg in 1309. [2] Copt Hewick's prefix was derived from the Old English word "coppede" and meant "with a peak of hill-top." [2]

Early History of the Houghick family

This web page shows only a small excerpt of our Houghick research. Another 78 words (6 lines of text) covering the years 1100, 1296 and 1425 are included under the topic Early Houghick History in all our PDF Extended History products and printed products wherever possible.

During the era when a person's name, tribe and posterity was one of his most important possessions, many different spellings were found in the archives examined. Houghick occurred in many references, and spelling variations of the name found included Hawick, Hawic and others.

More information is included under the topic Early Houghick Notables in all our PDF Extended History products and printed products wherever possible.

Migration of the Houghick family

Gradually becoming disenchanted with life in Ireland many of these uprooted families sailed aboard the armada of sailing ships known as the "White Sails" which plied the stormy Atlantic. These overcrowded ships often arrived with only 60 to 70% of their original passenger list, many dying of illness and the elements, were buried at sea. In North America, early immigrants bearing the family name Houghick, or a spelling variation of the surname include: George Hawick who settled in New England in 1680.