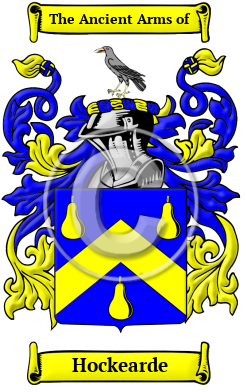 The Hockearde surname is derived form the Old English word "ortgeard," or "orceard," a compound of "wort," or "plant," and "geard," meaning "yard." It is thought to have originally been a topographic name for someone who lived by an orchard, or perhaps an occupational name for a fruit grower. There were also several places named Orchard, such as those in Devon and Somerset, and the surname may have been taken on from a place name.

Early Origins of the Hockearde family

The surname Hockearde was first found in Devon, where they held a family seat as Lords of the Manor of Hartland Abbey in that shire.

Early History of the Hockearde family

This web page shows only a small excerpt of our Hockearde research. Another 74 words (5 lines of text) covering the years 1410, 1750, 1468 and 1504 are included under the topic Early Hockearde History in all our PDF Extended History products and printed products wherever possible.

More information is included under the topic Early Hockearde Notables in all our PDF Extended History products and printed products wherever possible.

Migration of the Hockearde family to Ireland

Some of the Hockearde family moved to Ireland, but this topic is not covered in this excerpt.
Another 41 words (3 lines of text) about their life in Ireland is included in all our PDF Extended History products and printed products wherever possible.

Migration of the Hockearde family