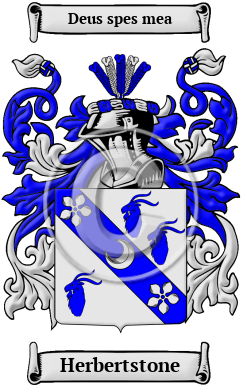 Early Origins of the Herbertstone family

The surname Herbertstone was first found in Argyllshire (Gaelic erra Ghaidheal), the region of western Scotland corresponding roughly with the ancient Kingdom of Dál Riata, in the Strathclyde region of Scotland, now part of the Council Area of Argyll and Bute, where they held a family seat. In the 11th and 12th century, Scotland was composed of several elements, the best known being the ancient Highland Clans which were both Dalriadan and Pictish in origin, possibly Viking. To the south, the lowland clans, and the Border Clans, and other distinguished families were more Norman and northern English. To the west there was a large Irish influence amongst the Gallowegians. This name first emerged in Glasgow and was descended from the Herberts. Archibald Herbertson was a businessman in Glasgow in 1525. [1]

Early History of the Herbertstone family

This web page shows only a small excerpt of our Herbertstone research. Another 49 words (4 lines of text) covering the years 1673, 1672, 1298, 1328, 1400, 1172 and are included under the topic Early Herbertstone History in all our PDF Extended History products and printed products wherever possible.

Notable amongst the family at this time was Archibald (died 1298), a 13th century Scottish prelate best known for involvement in a dispute with the Pope; and Archibald the Grim...
Another 29 words (2 lines of text) are included under the topic Early Herbertstone Notables in all our PDF Extended History products and printed products wherever possible.

Migration of the Herbertstone family to Ireland

Some of the Herbertstone family moved to Ireland, but this topic is not covered in this excerpt.
Another 99 words (7 lines of text) about their life in Ireland is included in all our PDF Extended History products and printed products wherever possible.

Migration of the Herbertstone family