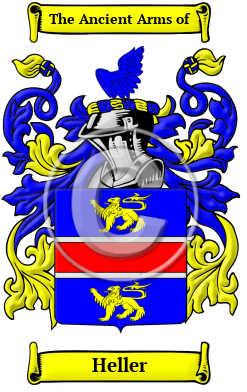 The history of the Heller family name begins in the German province of Bavaria. Heller is a nickname surname, a class of German names derived from eke-names, or added names, that described people by a personal characteristic or other attribute. Heller is a name for a person who lived in the Swabian town of Hall. Residents were so named because of the small medieval coin referred to as a heller which was first minted in the town in 1208.

Early Origins of the Heller family

The surname Heller was first found in Bavaria, where this family made important contributions toward the development of this kingdom from ancient times. Always prominent in social and political affairs, the family formed alliances with other families within the Feudal System and the nation. In the Middle Ages, the word "heller" referred to the coins that had been produced in Schwaebisch-Hall since the year 1208. Individual bearers of this name first mentioned in ancient chronicles include Herr Volkhart der Heller (1278) of Freiburg, Rudolph der Heller (b.1302,) a farmer in Zuerich, and Johann Heller (1378) of Goerlingen.

Early History of the Heller family

This web page shows only a small excerpt of our Heller research. Another 179 words (13 lines of text) covering the years 1595, 1728, 1756 and 1646 are included under the topic Early Heller History in all our PDF Extended History products and printed products wherever possible.

One can encounter great variation in the spelling of surnames: in early times, spelling in general, and thus the spelling of names was not yet standardized; and later, spellings would change with branching and movement of families. Variations of the name Heller include Heller, Hellern, Heler, Hellers, Hellerer, Helere, Hellere and many more.

More information is included under the topic Early Heller Notables in all our PDF Extended History products and printed products wherever possible.

Heller migration to the United States +

German settlers were among the most common to come to North America between the mid-17th and mid-20th centuries. Poverty and religious persecution drove many Bavarians to make this long trek. tenant farmers were also enticed by the prospect of owning land. From east to west, these German immigrants populated the United States, settling in Pennsylvania, Texas, New York, Illinois, and California. Ontario and the prairie provinces of Canada also provided homes to many. Early settlers bearing the Heller surname or a spelling variation of the name include:

Heller Settlers in United States in the 18th Century

Heller Settlers in United States in the 19th Century

Heller Settlers in Canada in the 18th Century

Historic Events for the Heller family +

Suggested Readings for the name Heller +