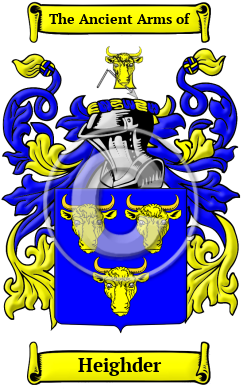 The proud Heighder family originated in Cornwall, a rugged coastal region in southwestern England. In early times, people were known by only a single name. However, as the population grew and people traveled further afield, it became increasingly necessary to assume an additional name to differentiate between bearers of the same personal name. The manner in which hereditary surnames arose is interesting. Local surnames are derived from where the original bearer lived, was born, or held land. The Heighder family originally lived in Devon. Their name, however, is derived from the Old English word heah, which means hill or raised land. [1]

Early Origins of the Heighder family

The surname Heighder was first found in Devon, where they held a family seat from ancient times. Early in their history the family branched to Cambridgeshire, where William Haytere was registered in the Assize Rolls of 1260. There was also registry of Reginald le Heytur in 1296. [2]

Early History of the Heighder family

Notable amongst the family at this time was Richard Hayter (1611?-1684), English theological writer, born about 1611, son of William Hayter, fishmonger, of Salisbury, Wiltshire. In 1628 he entered Magdalen Hall, Oxford, as a commoner, and graduated B.A. 26 April 1632, and M.A. 29 Jan. 1634. [4] Thomas Hayter (1702-1762), was bishop successively of Norwich and London, baptised at Chagford, Devonshire...
Another 59 words (4 lines of text) are included under the topic Early Heighder Notables in all our PDF Extended History products and printed products wherever possible.

Migration of the Heighder family

A look at the immigration and passenger lists has shown a number of people bearing the name Heighder: George Hayter, who sailed to Barbados between 1654 and 1663. In addition, John Hayter had settled in Tilton, Newfoundland by 1771; and John Haiter was recorded as a planter in Trinity, Newfoundland in 1830..