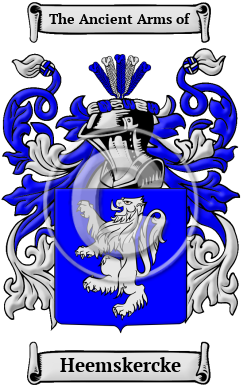 Early Origins of the Heemskercke family

The surname Heemskercke was first found in Holland, where Heemskerk is a municipality and a town in the province of North Holland which dates back to at least the year 1063, when the town was known as Hemezen Kyrica, Latinized Frisian meaning Church of Hemezen. The place holds many historical monuments, among them the Huldtoneel, a man-made hill located near the current Rijksstraatweg, where once the Counts of Holland where inaugurated. Two castles, Castle Oud Haerlem and Castle Heemskerk were built in the twelfth and thirteenth century respectively to protect the County of Holland against the West Frisians. Both castles survive today. Castle Heemskerk, renamed Castle Marquette in 1610 is now owned by a Spanish hoteleliers.

Early History of the Heemskercke family

From this era of Dutch history, those of this who distinguished themselves included Jacob van Heemskerk (1567-1607), Dutch explorer and admiral commanding the Dutch fleet at the Battle of Gibraltar, famous for his attempt to discover an Arctic passage from Europe to China in 1596, died as a result of leg wounds caused by cannonball, shortly after the Battle of Gibraltar; Johan van Heemskerk (1597-1656), Dutch poet, was best known for his first volume of poems, Minnekunst (The Art of Love), which appeared in 1622. Egbert van Heemskerk...
Another 86 words (6 lines of text) are included under the topic Early Heemskercke Notables in all our PDF Extended History products and printed products wherever possible.

Migration of the Heemskercke family