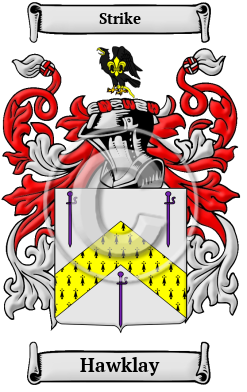 The ancient Anglo-Saxon surname Hawklay came from the Old English personal name Hafoc, which means hawk. But, the surname also evolved from a nickname, for someone with a Hawk-like, or "wild" disposition. [1] [2] [3]

It may also be an occupational surname given to a "hawker" or someone who held land in exchange for providing hawks to a lord. [4]

On the more romantic side, one reference claims the name derives from the "bird: allusive to keenness of disposition." [2]

Early Origins of the Hawklay family

This same source has another interesting entry: "Osbertus filius Hauoc c1115 [who was found as an Old English Byname in Oxfordshire] is probably to be identified with Osbern Hauoc (ibid.). His father bore the OE name of Hafoc 'hawk'." [4]

In 1130 the Pipe Rolls list Ralph Hauoc who owed the exchequer two 'Girfals', gerfalcons or hawks. Other early record from the same source include: William del Halk who was found in Bury St Edmunds, Suffolk in 1188; Adam de Halk in the Assize Rolls for Cambridgeshire in 1260; and William atte Halk and Alan Hauke in the Subsidy Rolls for Suffolk in 1327. [4]

The Hundredorum Rolls of 1273 had only one listing for the name, that of Jocelin de Hawke, but no county was provided. Later the Yorkshire Poll Tax Records of 1379 list: Thomas Hauke; Thomas Hauke, cottier; Adam Hawke; and Johannes Hawke. [3]

Early History of the Hawklay family

Sound was what guided spelling in the essentially pre-literate Middle Ages, so one person's name was often recorded under several variations during a single lifetime. Also, before the advent of the printing press and the first dictionaries, the English language was not standardized. Therefore, spelling variations were common, even among the names of the most literate people. Known variations of the Hawklay family name include Hawk, Hawke, Hawkes, Hauk, Hauke and others.

Notables of this surname at this time include: Edward Hawke (1705-1781), British admiral, 1st Baron Hawke of Towton, county Yorkshire. He was "born in London in 1705, was only son of Edward Hawke, barrister, of Lincoln's Inn. His father's family was settled for many generations at Treriven in Cornwall. In 1718 his father died, and Hawke, left the ward of his uncle, Martin Bladen, entered the navy on 20 Feb. 1719 as a volunteer on board the Seahorse, commanded by Captain Thomas Durell...
Another 83 words (6 lines of text) are included under the topic Early Hawklay Notables in all our PDF Extended History products and printed products wherever possible.

Migration of the Hawklay family to Ireland

Some of the Hawklay family moved to Ireland, but this topic is not covered in this excerpt.
Another 57 words (4 lines of text) about their life in Ireland is included in all our PDF Extended History products and printed products wherever possible.

Migration of the Hawklay family

For political, religious, and economic reasons, thousands of English families boarded ships for Ireland, the Canadas, the America colonies, and many of smaller tropical colonies in the hope of finding better lives abroad. Although the passage on the cramped, dank ships caused many to arrive in the New World diseased and starving, those families that survived the trip often went on to make valuable contributions to those new societies to which they arrived. Early immigrants bearing the Hawklay surname or a spelling variation of the name include: Mathew and Margaret Hawke, who arrived in Boston in 1630 and later moved to Salem; John Hawke, who arrived in Lynn, MA in 1630; Mary Hawkes, who came to Virginia in 1635.