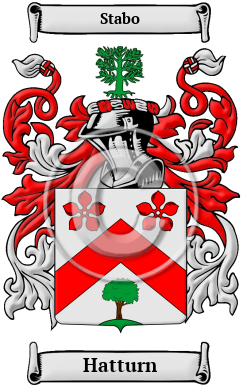 The ancestors of the name Hatturn date back to the Anglo-Saxon tribes of Britain. The name is derived from when the Hatturn family lived in the settlement of Hawthorn in the county of Durham, or near a hawthorn shrub or tree. Thus, the surname Hatturn belongs both the category of habitation names, which are derived from pre-existing names for towns, villages, parishes, or farmsteads, and to the class of topographic surnames, which were given to people who resided near physical features such as hills, streams, churches, or types of trees. The surname Hatturn is derived from the Old English word haguthorn, which means hawthorn.

Early Origins of the Hatturn family

The surname Hatturn was first found in Durham at Hawthorn, a township in the parish of Easington. The township dates back to 1155 when it was originally spelt Hagethorn and literally meant "place at the hawthorn," from the Old English "hagu-thorn." [1] The place is most significant as "on the 5th of November, 1824, not less than 50 vessels perished in a storm immediately off this part, and the crews of all were lost, with the exception of the crew of one only, who were enabled to effect their escape by means of a rope, thrown from the vessel, and brought to land by a Newfoundland dog belonging to Major Anderson." [2] "The New England family of this name left this country [(England)] in or before 1634, and until recently wrote themselves Hathorne." [3] In Scotland, the name is an old Galloway name. "A family of the name were proprietors of Meikle or Over Aires in the parish of Kirkinner." [4] In other parts of England, the Hundredorum Rolls of 1273 revealed: Galfridus Hackthom in Huntingdonshire; and John atte Horethorne in Somerset. [5]

Early History of the Hatturn family

It is only in the last few hundred years that the English language has been standardized. For that reason, early Anglo-Saxon surnames like Hatturn are characterized by many spelling variations. As the English language changed and incorporated elements of other European languages, even literate people changed the spelling of their names. The variations of the name Hatturn include: Hawthorne, Hathorne, Hawthorn and others.

Notables of the family at this time include Major William Hathorne (ca. 1606-1681), English immigrant to North America in 1630; and his son, John Hathorne (1641-1717), a merchant and magistrate of the Massachusetts Bay Colony, Justice of the Special Court...
Another 39 words (3 lines of text) are included under the topic Early Hatturn Notables in all our PDF Extended History products and printed products wherever possible.

Migration of the Hatturn family to Ireland

Some of the Hatturn family moved to Ireland, but this topic is not covered in this excerpt.
Another 60 words (4 lines of text) about their life in Ireland is included in all our PDF Extended History products and printed products wherever possible.

Migration of the Hatturn family

Many English families tired of political and religious strife left Britain for the new colonies in North America. Although the trip itself offered no relief - conditions on the ships were extremely cramped, and many travelers arrived diseased, starving, and destitute - these immigrants believed the opportunities that awaited them were worth the risks. Once in the colonies, many of the families did indeed prosper and, in turn, made significant contributions to the culture and economies of the growing colonies. An inquiry into the early roots of North American families has revealed a number of immigrants bearing the name Hatturn or a variant listed above: Mathew Hawthorn settled in Virginia in 1622; William Hathorne, who arrived in Dorchester, in 1630, later settling in Salem Massachusetts in 1630; Anne Hathorne, who came to Virginia in 1717.