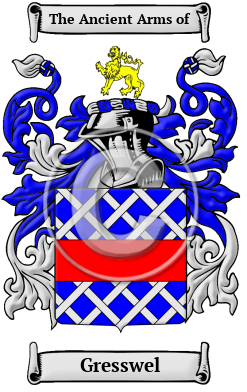 Early Origins of the Gresswel family

The surname Gresswel was first found in Renfrewshire (Gaelic: Siorrachd Rinn Friù), a historic county of Scotland, today encompassing the Council Areas of Renfrew, East Renfrewshire, and Iverclyde, in the Strathclyde region of southwestern Scotland where they were recorded as a family of great antiquity seated at Carswell in the parish of Neilston in that shire, and later branched to Carnswell in the barony of Carnwath in Lanarkshire, and to Carswell in the barony of Hassendean in Roxburghshire.

Early History of the Gresswel family

Spelling and translation were hardly exact sciences in Medieval Scotland. Sound, rather than any set of rules, was the basis for spellings, so one name was often spelled different ways even within a single document. Spelling variations are thus an extremely common occurrence in Medieval Scottish names. Gresswel has been spelled Carswell, Cresswell, Carsewell, Cressville, Carswele, Kersewell, Cressewell, Chriswell and many more.

Notable amongst the family at this time was John Carsewell (fl. 1560-1572), Scottish Bishop of the Isles, was in his earlier years chaplain to the Earl of Argyll and rector of Kilmartin. He was also Dean of the Chapel Royal of Stirling. "In his capacity of superintendent of Argyll he was appointed by the assembly, in 1567, to 'take satisfaction' from Argyll for separation from his wife, and for 'other heinous offences'. In July 1569 he was rebuked by the assembly for accepting the...
Another 83 words (6 lines of text) are included under the topic Early Gresswel Notables in all our PDF Extended History products and printed products wherever possible.

Migration of the Gresswel family

Such hard times forced many to leave their homeland in search of opportunity across the Atlantic. Many of these families settled along the east coast of North America in communities that would become the backbones of the young nations of the United States and Canada. The ancestors of many of these families have rediscovered their roots in the 20th century through the establishment of Clan societies and other patriotic Scottish organizations. Among them: John Carswell who settled in Charles Town [Charleston], South Carolina in 1767 with his wife Anne, and his children George, Joseph, Thomas, and Rebecca.