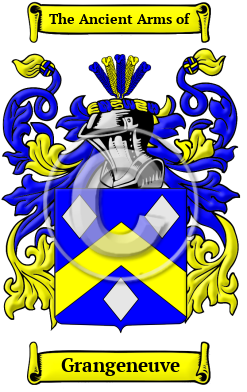 Early Origins of the Grangeneuve family

The surname Grangeneuve was first found in Champagne.

Early History of the Grangeneuve family

Notable amongst the family during this period was Jean de La Grange (Jean de Lagrange), (c. 1325-1402), French prelate and politician, during the reigns of Charles V and Charles VI, important member of the papal curia at Avignon; Granger (c. 1680s-1734), born Tourtechot, was a French physician and traveler; Jean Grangeret, born in Vezet (Haute-Sarne) in 1738, who was a general; Louis Grange was an episcopal vicar around 1761; Lucie-Anne Poujoulas or Mrs Adolphe Grange, born in 1838, was a writer; Pierre-Eugène...
Another 82 words (6 lines of text) are included under the topic Early Grangeneuve Notables in all our PDF Extended History products and printed products wherever possible.

Migration of the Grangeneuve family