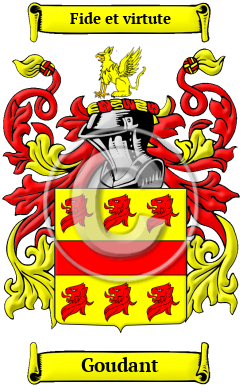 The name Goudant originated with the Anglo-Saxon tribes that once ruled Britain. It is derived from the baptismal name for the son of Godwin.

Early Origins of the Goudant family

The surname Goudant was first found in Yorkshire where they held a family seat from very early times. Godwin or Godwine (d. 1053) was the Earl of Wessex, chief adviser to King Canute, who held great wealth and lands in those times. His son Harold Godwinson (circa 1022-1066) was Harold II of England, the last Anglo-Saxon King of England, killed on October 14 1066 at the Battle of Hastings. Godwin, or Godwine was also the name of an 11th century Bishop of Lichfield, who died in 1020. [1]

Early History of the Goudant family

One relatively recent invention that did much to standardize English spelling was the printing press. However, before its invention even the most literate people recorded their names according to sound rather than spelling. The spelling variations under which the name Goudant has appeared include Godwin, Goodwin, Goodin, Gooding, Goodings, Goodwyn, Godwyn, Godwine, Goodwine, Goddwin, Goddwyn, Goddywne and many more.

Distinguished members of the family include Thomas Godwin (1517-1590), Bishop of Bath and Wells, born in 1517 at Oakingham, Berkshire, of poor parents; Francis Godwin (1562-1633), English divine, Bishop of Llandaff and of Hereford; John Goodwin (1594-1665), an English preacher, theologian and prolific author; John Goodwin (1603-1674), an English lawyer and politician who sat in the House of Commons between 1641 and 1660, supporter of the Parliamentary cause in the English Civil War; Peter Gooden (died 1695), an English Roman Catholic priest; Thomas Godwin (died 1677), a Virginia politician and landowner, served in the House of Burgesses 1654-1655...
Another 98 words (7 lines of text) are included under the topic Early Goudant Notables in all our PDF Extended History products and printed products wherever possible.

Migration of the Goudant family to Ireland

Some of the Goudant family moved to Ireland, but this topic is not covered in this excerpt.
Another 84 words (6 lines of text) about their life in Ireland is included in all our PDF Extended History products and printed products wherever possible.

Migration of the Goudant family

At this time, the shores of the New World beckoned many English families that felt that the social climate in England was oppressive and lacked opportunity for change. Thousands left England at great expense in ships that were overcrowded and full of disease. A great portion of these settlers never survived the journey and even a greater number arrived sick, starving, and without a penny. The survivors, however, were often greeted with greater opportunity than they could have experienced back home. These English settlers made significant contributions to those colonies that would eventually become the United States and Canada. An examination of early immigration records and passenger ship lists revealed that people bearing the name Goudant arrived in North America very early: Reinould Godwin, who arrived in Virginia in 1620; Mrs. Goodwin settled in Boston Massachusetts in 1632; Daniel Godwin, who came to Virginia in 1635; Deveraux Godwin, who arrived in Maryland in 1638.