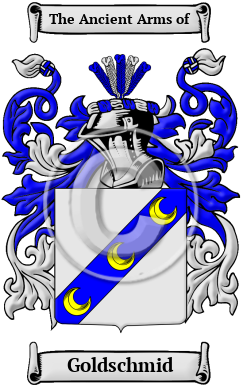 The origins the old family name Goldschmid can be found within medieval Austria. While the patronymic and metronymic surnames, which are derived from the name of the father and mother respectively, are the most common forms of a hereditary surnames in Germany, occupational surnames also emerged during the late Middle Ages. Many people, such as the Goldschmid family, adopted the name of their occupation as their surname. However, an occupational name did not become a hereditary surname until the office or type of employment became hereditary. The surname Goldschmid was an occupational name for a goldsmith.

Early Origins of the Goldschmid family

The surname Goldschmid was first found in Austria, where this family name became a prominent contributor to the development of the district from ancient times. Always prominent in social affairs, the name became an integral part of that alpine land as it emerged to form alliances with other families within the Feudal System and the nation.

Early History of the Goldschmid family

During this period prominent bearers of the name Goldschmid were Hermann Goldschmidt (1802-1866) astronomer and painter; Richard Goldschmidt (1878-1958), wrote on hereditary theories. Henriette Goldschmidt (1825-1920) was a feminist educator and advocator...
Another 32 words (2 lines of text) are included under the topic Early Goldschmid Notables in all our PDF Extended History products and printed products wherever possible.

Migration of the Goldschmid family

Austria was made a republic after the First World War. The Austro-Hungarian Empire was broken up by the Treaty of Versailles and many of its people found themselves in the new nation of Czechoslovakia. Many other Austrians and expatriate Austrians made their way to North America in the 20th century. Most landed in Philadelphia, later continuing on to the states of Ohio, Texas, Illinois, California, New York, and Maryland. Some Austrian settlers also went to western Canada and Ontario. Research into the origins of individual families in North America revealed records of the immigration of a number of people bearing the name Goldschmid or a variant listed above: Johann Goldschmidt, who arrived in America in 1778; Bernhard Goldschmidt came to New York city in 1852; and Hermann Goldschmidt came to Philadelphia in 1876..