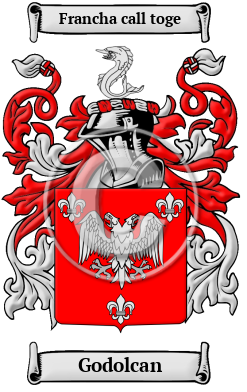 Early Origins of the Godolcan family

The surname Godolcan was first found in Cornwall at Godolphin, a church district, in the parish of Breage, union of Helston, hundred of Kerrier. "This place, anciently called Godolcan, has been long celebrated for its tin-mines. It gave name to the family of Godolphin, who were its lords in the time of William the Conqueror, and of whom Sir Francis Godolphin, by his perseverance and success in mining, increased the customs more than £10,000 per annum in the reign of Elizabeth. Sidney, son of Sir William Godolphin, Bart., a distinguished statesman, was in 1689 created Baron Godolphin, of Rialton, which title, having become extinct, was revived in 1832. An old mansion on the Godolphin estate, belonging to the Duke of Leeds, is now occupied by a farmer." [1]

"In this parish is the well known manor of Godolphin, which, through a series of ages belonged to an ancient family that resided here. Speaking of its famous mine, Carew observes, that the name originally was Godolghan, though lately declined with a milder accent to Godolphin, which in Cornish signifies a white eagle. Some variations in the name of the family took place in the reign of Henry VII. ; from which time it remained unaltered until it became extinct.

Britton says, 'Godolphin is an ancient manor of the Godolphin family, who resided here in the time of William the Conqueror.' Hals indeed admits the name of this place, either as Godolghan or Godolphin, to be very ancient; but he contends that its possessors did not assume this name until the days of Henry VII. when it was changed from Nava, or Knava, to Godolphin." [2]

The Scilly Islands lie west-south-west from the Land's End, Cornwall. "In the reign of queen Elizabeth they were granted by her to Francis Godolphin for 38 years, at the rent of £10 per annum;- in 1604, this lease was renewed to Sir William Godolphin for 50 years, at £20 per annum. And from that time the grant, though frequently renewed, has continued in the same family." [2]

Early History of the Godolcan family

Spelling variations of this family name include: Godolphin, Godolcan, Godolghan, Godolhan, Godolfan and many more.

Migration of the Godolcan family