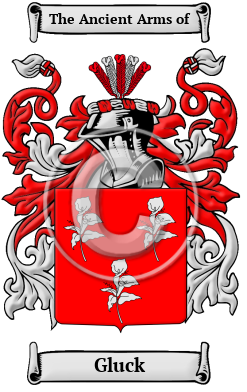 The name Gluck is a proud symbol of ancient Jewish culture. Before the late Middle Ages, people were known only by a single name. However, as the population increased and travelers set out on their journeys, it became necessary for people to adopt a second name to identify themselves. Jewish hereditary surnames were adopted from a variety of different sources. The name Gluck is a Jewish Ashkenazic ornamental name. Numerous Jewish surnames are ornamental surnames, which are names that have an ornamental value and are not necessarily related to the localities, occupations, nicknames or given names of the first person who used the name. However, ornamental names were often derived from elements that described locations or features of geography, animals and birds, occupations or personal names. The surname Gluck is taken from the Yiddish word glik, which means luck. The surname Gluck may also be a metronymic surname, which means that it was originally derived from the given name of the bearers mother. In the Middle Ages, the name Gluckel was a common Yiddish name for women.

In the United States, the name Gluck is the 8,389th most popular surname with an estimated 2,487 people with that name. [1]

Gluck migration to the United States +

Gluck Settlers in United States in the 18th Century

Gluck Settlers in United States in the 19th Century