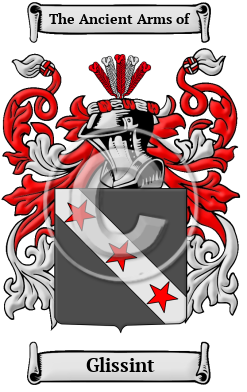 Many Irish names are merely English translations of Gaelic names. The name Glissint was a translation of the Gaelic name O Glasain or O Gliasain.

Early Origins of the Glissint family

The surname Glissint was first found in County Tipperary (Irish: Thiobraid Árann), established in the 13th century in South-central Ireland, in the province of Munster, where they held a family seat from very ancient times.

Early History of the Glissint family

Many different spelling variations of the surname Glissint exist in the archives researched. Ancient scribes and church officials recorded names as they were pronounced, often resulting in a single person being recorded under several different spellings. Different spellings that were found include Gleason, Gleeson, Glissane, Gleasone, Gleesone, Glissaun, Gleasaune, Glissen and many more.

Notable among the family name at this time was Francis Glisson (1597-1677), a British physician, anatomist, and writer on medical subjects. He was the second son of William Glisson of Rampisham in Dorsetshire. He entered at Caius College, Cambridge, in 1617, graduated B.A. 1621, and M.A...
Another 46 words (3 lines of text) are included under the topic Early Glissint Notables in all our PDF Extended History products and printed products wherever possible.

Migration of the Glissint family

Irish families began to migrate to North America in the late 18th century in the hopes of gaining their own plot of land. The majority of these early immigrant families were relatively well off because the transatlantic passage was costly. As a result the decision to immigrate was carefully made. Those immigrants that arrived in the late 1840s differed because their decision to leave was in direct response to the Great Potato Famine. Many of the families that crossed the Atlantic during this decade were destitute, either having spent all they had on the fare or even starting with nothing, but being sponsored by a philanthropic society. Whenever, these Irish families came to North America, they were made great contributions to the developing nations of the United States and what would come to be known as Canada: the earlier settlers as land clearing homesteaders, and the later immigrants as the muscle that would build the industries and routes of transportation so critical to a powerful nation. Research into the passenger and immigration lists has shown many early and significant Irish immigrants bearing the name Glissint: Thomas Gleason who settled in Boston Massachusetts in 1762; followed by John in 1766; Nelly Gleeson settled in Canada in 1840; Martin Gleeson settled in New York in 1850.