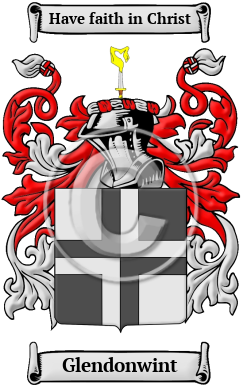 The Glendonwint surname was taken on from the place name Glendonwyne, a parish of Westerkirk, Dumfriesshire, on record since the 13th century. [1] [2] The name literally means "one who came from Glendinning (glen of the fair hill)." [3]

Early Origins of the Glendonwint family

The surname Glendonwint was first found in Dumfriesshire. "Douglas (Baronage) states that a charter was granted by John Macgill of that Ilk (de eodem) to Adam de Glendonwyn of all his part of the lands and beronies of Clifton and Merbotel in the shire of Roxburgh prior to 1286." [4]

Early History of the Glendonwint family

Notable amongst the family at this time was Matthew de Glendonwyn (d. 1408), late 14th and early 15th century bishop of Glasgow, elected to the see after the death of Cardinal Walter Wardlaw, his predecessor as bishop, elected sometime between Wardlaw's death in September and Matthew's first appearance as bishop-elect in December, consecrated some months after his election...
Another 58 words (4 lines of text) are included under the topic Early Glendonwint Notables in all our PDF Extended History products and printed products wherever possible.

Migration of the Glendonwint family to Ireland

Some of the Glendonwint family moved to Ireland, but this topic is not covered in this excerpt.
Another 67 words (5 lines of text) about their life in Ireland is included in all our PDF Extended History products and printed products wherever possible.

Migration of the Glendonwint family