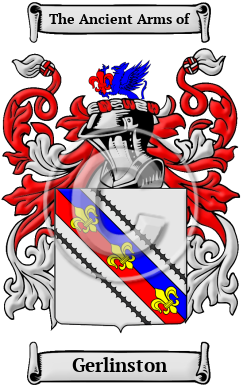 The Gerlinston surname is thought to be a habitational name taken on from a now lost or unidentified place name in England.

Early Origins of the Gerlinston family

The surname Gerlinston was first found in Norfolk where the family name was first referenced in the year 1296 when William Girlyn held estates in that shire. The Girlington family were early proprietors of the township of Leck in Lancashire. [1]

Early History of the Gerlinston family

This web page shows only a small excerpt of our Gerlinston research. Another 137 words (10 lines of text) covering the years 1455, 1487, 1177 and 1642 are included under the topic Early Gerlinston History in all our PDF Extended History products and printed products wherever possible.

More information is included under the topic Early Gerlinston Notables in all our PDF Extended History products and printed products wherever possible.

Migration of the Gerlinston family