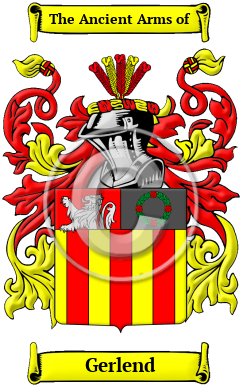 The name Gerlend originated among the descendants of the ancient Pictish clans. It is derived from the Old English personal name Gærland. However, the surname Gerlend may be a local name derived from some place which is now unknown; gær and land are common elements in Old English nomenclature.

Early Origins of the Gerlend family

However, we must look south to find the first record of the name. Johannes de Garlandia or John of Garland ( fl. c. 1205-1255) was a philologist and university teacher who studied at Oxford. Another Johannes de Garlandia (Johannes Gallicus) (fl. c. 1270-1320) was a French music theorist of the late ars antiqua period of medieval music. And John Garland (fl. 1230), was an early grammarian and alchemist, who was assigned by Bale and Pits to the eleventh century, but some argue that he was also a native of France. [1]

Early History of the Gerlend family

During the Middle Ages, there was no basic set of rules and scribes wrote according to sound. The correct spelling of Scottish names were further compromised after many haphazard translations from Gaelic to English and back. Spelling variations of the name Gerlend include Garland, Garlland, Gerland, Gerlond and others.

Notable amongst the Clan at this time was Augustine Garland (fl. 1660), English Regicide, son of Augustine Garland, attorney, of Coleman Street, London. By the death of his father, in 1637, he succeeded to property in Essex at Hornchurch and Waltham-holy-Cross, and at Queenborough in the island of Sheppey. On 9 May 1660 he appeared before the lord mayor of London and claimed the benefit of the king's declaration. Nevertheless he was put on his trial, and on...
Another 77 words (6 lines of text) are included under the topic Early Gerlend Notables in all our PDF Extended History products and printed products wherever possible.

Migration of the Gerlend family to Ireland

Some of the Gerlend family moved to Ireland, but this topic is not covered in this excerpt.
Another 57 words (4 lines of text) about their life in Ireland is included in all our PDF Extended History products and printed products wherever possible.

Migration of the Gerlend family

Scots left their country by the thousands to travel to Australia and North America. Desperate for freedom and an opportunity to fend for themselves, many paid huge fees and suffered under terrible conditions on long voyages. Still, for those who made the trip, freedom and opportunity awaited. In North America, many fought their old English oppressors in the American War of Independence. In recent years, Scottish heritage has been an increasingly important topic, as Clan societies and other organizations have renewed people's interest in their history. An examination of passenger and immigration lists shows many early settlers bearing the name of Gerlend: Daniel and Elizabeth Garland who settled in Barbados in 1654; Hugh Garland settled in Virginia in 1634; Peter Garland settled in Virginia in 1650; Robert Garland settled in Virginia in 1655.