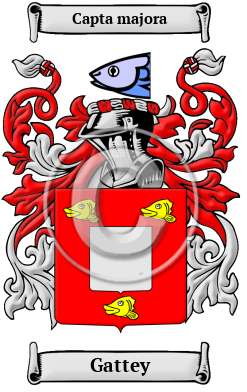 The Scottish name Gattey is thought to be a habitational name, taken on from a place name in the county of Nairn. The place name Geddes is thought to have come from a Gaelic term for a mountain ridge. It has also been suggested that the surname was a patronymic created from the personal name Geddie, of uncertain origin, but which may come from a Scots dialect word "gedd," meaning "pike."

Early Origins of the Gattey family

The surname Gattey was first found in Nairnshire (Gaelic: Siorrachd Inbhir Narann) in northern Scotland, today part of the Council Area of Highland where they held the lands of Geddes, formerly held by the Rose family. Further south the Gedding variant were first found in the parish of Gedding in Suffolk. "This place, which comprises about 580 acres, was the property of Sir John Gedding, who resided in the manorhouse of Gedding Hall, and died about the 21st of the reign of Edward I." [1]

Early History of the Gattey family

Notable amongst the Clan from early times was John Gedy , the Abbot of Arbroath in 1394, said to have been influential in creating the harbour there. According to Edinburgh tradition, Jenny Geddes (c.1600-c. 1660), a Scottish market-trader is said to have thrown a stool at the head of the minister in St Giles' Cathedral in objection to the first use of the Anglican Book of Common Prayer in Scotland. The act is supposed to...
Another 74 words (5 lines of text) are included under the topic Early Gattey Notables in all our PDF Extended History products and printed products wherever possible.

Migration of the Gattey family to Ireland

Some of the Gattey family moved to Ireland, but this topic is not covered in this excerpt.
Another 111 words (8 lines of text) about their life in Ireland is included in all our PDF Extended History products and printed products wherever possible.

Gattey migration to the United States +

Gattey Settlers in United States in the 19th Century

Gattey Settlers in Australia in the 19th Century