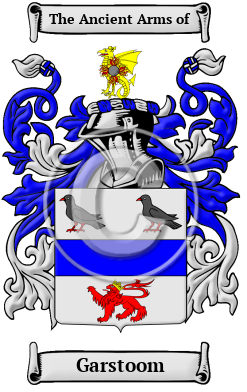 The distinguished surname Garstoom emerged among the industrious people of Flanders, which was an important trading partner and political ally of Britain during the Middle Ages. As a result of the frequent commercial intercourse between the Flemish and English nations, many Flemish migrants settled in Britain. In early times, people were known by only a single name. However, as the population grew and people traveled further afield, it became increasingly necessary to assume an additional name to differentiate between bearers of the same personal name. One of the most common classes of surname is the patronymic surname, which was usually derived from the first name of the person's father. Flemish surnames of this type are often characterized by the diminutive suffix -kin, which became very frequent in England during the 14th century. The surname Garstoom is derived from in Garston, Lancashire, a hamlet on the river Mersey. Here they held the title of Lords of the Manor of Garston, and from it took their name. There are several other locations so named in England and any individual case of the name may be a reference to the bearer's residence in one of these other places. The name of Garston, Lancashire derives from the Old English elements great, which means large or imposing, and stan, which means stone. Other places named Garston generally derive from the Old English elements goers or grass, which means grass, and tun, which means enclosure or settlement. This is a classic example of an English polygenetic surname, which is a surname that was developed in a number of different locations and adopted by various families independently.

Early Origins of the Garstoom family

The surname Garstoom was first found in Lancashire where they were Lords of the manor of Garston, a small hamlet on the Mersey. "At a very early period this place gave name to a local family, of whom Adam de Gerstan died in 1265." [1]

Early History of the Garstoom family

This web page shows only a small excerpt of our Garstoom research. Another 38 words (3 lines of text) covering the years 1600, 1641, 1640 and 1641 are included under the topic Early Garstoom History in all our PDF Extended History products and printed products wherever possible.

Flemish surnames are characterized by a large number of spelling variations. One reason for this is that medieval English lacked definite spelling rules. The spellings of surnames were also influenced by the official court languages, which were French and Latin. Names were rarely spelled consistently in medieval times. Scribes and church officials recorded names as they sounded, rather than adhering to specific spelling rules, and people often had their names registered in several different forms throughout their lives. One of the greatest reasons for change is the linguistic uniqueness of the Flemish settlers in England, who spoke a language closely related to Dutch. The pronunciation and spelling of Flemish names were often altered to suit the tastes of English-speaking people. In many cases, the first, final, or middle syllables of surnames were eliminated. The name has been spelled Garstone, Garston, Garstin, Garstine and others.

Another 31 words (2 lines of text) are included under the topic Early Garstoom Notables in all our PDF Extended History products and printed products wherever possible.

Migration of the Garstoom family to Ireland

Some of the Garstoom family moved to Ireland, but this topic is not covered in this excerpt.
Another 45 words (3 lines of text) about their life in Ireland is included in all our PDF Extended History products and printed products wherever possible.

Migration of the Garstoom family

A look at the immigration and passenger lists has shown a number of people bearing the name Garstoom: Joseph Garston who settled in Annapolis Maryland in 1753.