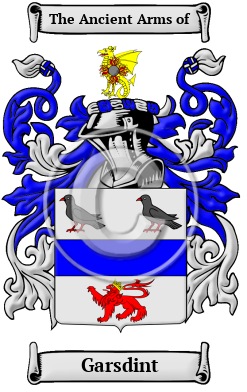 The ancient surname Garsdint came from in Garston, Lancashire, a hamlet on the river Mersey. Here they held the title of Lords of the Manor of Garston, and from it took their name. There are several other locations so named in England and any individual case of the name may be a reference to the bearer's residence in one of these other places. The name of Garston, Lancashire derives from the Old English elements great, which means large or imposing, and stan, which means stone. Other places named Garston generally derive from the Old English elements goers or grass, which means grass, and tun, which means enclosure or settlement. This is a classic example of an English polygenetic surname, which is a surname that was developed in a number of different locations and adopted by various families independently.

Early Origins of the Garsdint family

The surname Garsdint was first found in Lancashire where they were Lords of the manor of Garston, a small hamlet on the Mersey. "At a very early period this place gave name to a local family, of whom Adam de Gerstan died in 1265." [1]

Early History of the Garsdint family

This web page shows only a small excerpt of our Garsdint research. Another 38 words (3 lines of text) covering the years 1600, 1641, 1640 and 1641 are included under the topic Early Garsdint History in all our PDF Extended History products and printed products wherever possible.

Huguenot surnames were only slightly Anglicized, and they remain to this day a distinct group of surnames in England. Nevertheless, Huguenot surnames have been subject to numerous spelling alterations since the names emerged in France. French surnames have a variety of spelling variations because the French language has changed drastically over the centuries. French was developed from the vernacular Latin of the Roman Empire. It is divided into three historic and linguistic periods: Old French, which developed before the 14th century; Middle French, which was used between the 14th and 16th centuries; and Modern French, which was used after the 16th century and continues to be in use today. In all of these periods, the French language was heavily influenced by other languages. For example, Old French was infused with Germanic words and sounds when the barbarian tribes invaded and settled in France after the fall of the Roman Empire. Middle French also borrowed heavily from the Italian language during the Renaissance. Huguenot names have numerous variations. The name may be spelled Garstone, Garston, Garstin, Garstine and others.

Another 31 words (2 lines of text) are included under the topic Early Garsdint Notables in all our PDF Extended History products and printed products wherever possible.

Migration of the Garsdint family to Ireland

Some of the Garsdint family moved to Ireland, but this topic is not covered in this excerpt.
Another 45 words (3 lines of text) about their life in Ireland is included in all our PDF Extended History products and printed products wherever possible.

Migration of the Garsdint family

Research into the origins of individual families in North America has revealed records of the immigration of a number of people bearing the name Garsdint or a variant listed above: Joseph Garston who settled in Annapolis Maryland in 1753.