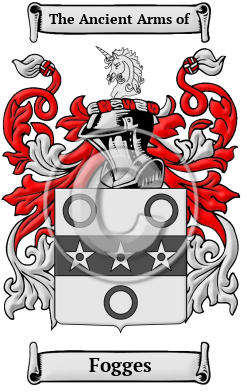 Fogges is a name of ancient Anglo-Saxon origin and comes from the family once having lived in the area that was referred to as the fogge, a Old English word which means the grass that was left to grow once the hay had been cut. The surname Fogges also has occupational origins when it refers a farmer who had grazing cattle on the grass during the winter months.

Early Origins of the Fogges family

The surname Fogges was first found in Kent or perhaps Lancashire. Lower states that "it is an ancient Kentish family," [1] while Bardsley claims the name is a "well-known Lancashire surname. " [2]

Early records of the family are scarce, but we did find record of Thomas Fogg, in Norfolk in 1509 [3] and Robert Fogg, of Radcliffe, yeoman in Cheshire in 1592. [2]

Phileas Fogg, the fictional protagonist Jules Verne's novel Around the World in Eighty Days was inspired by the American writer and adventurer William Perry Fogg (1826-1909.)

Early History of the Fogges family

Sound was what guided spelling in the essentially pre-literate Middle Ages, so one person's name was often recorded under several variations during a single lifetime. Also, before the advent of the printing press and the first dictionaries, the English language was not standardized. Therefore, spelling variations were common, even among the names of the most literate people. Known variations of the Fogges family name include Fogg, Fogge, Foge, Fog and others.

Migration of the Fogges family

For political, religious, and economic reasons, thousands of English families boarded ships for Ireland, Canada, the America colonies, and many of smaller tropical colonies in the hope of finding better lives abroad. Although the passage on the cramped, dank ships caused many to arrive in the New World diseased and starving, those families that survived the trip often went on to make valuable contributions to those new societies to which they arrived. Early immigrants bearing the Fogges surname or a spelling variation of the name include: Whitting Fogg who settled in Virginia in 1653; Ralph Fogg settled in Salem Massachusetts in 1630; John Fogg settled in Boston in 1630; William Fogg settled in Virginia in 1773..