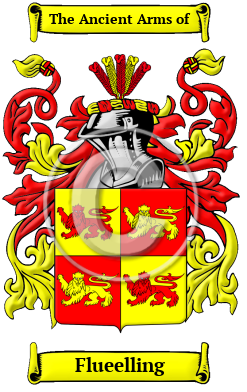 The Flueelling surname is derived from the Welsh personal name Llewellyn, which was also spelled Llywelin. This name is often explained as meaning lion-like, but is in fact probably derived from the Welsh word "llyw," which means leader. The Welsh double l was a constant source of trouble to English speakers, and was often translated "f." "A very ancient Welsh personal name, borne by many princes and magnates of Celtic origin." [1]

Early Origins of the Flueelling family

The surname Flueelling was first found in Pembrokeshire (Welsh: Sir Benfro), a county in south-west Wales, anciently part of the Welsh kingdom of Deheubarth. The most famous and oldest reference of the name was Dafydd ap Llywelyn (c.1212-1246), Prince of Gwynedd from 1240 to 1246, the first ruler to claim the title Prince of Wales. His father was Llywelyn the Great (Welsh: Llywelyn Fawr) (c. 1172-1240), Prince of Gwynedd in north Wales who eventually became ruler over most of Wales. "Davydd ab Llewelyn died at Aber, about 1246, and was buried in the abbey of Conway." [2]

Early History of the Flueelling family

This web page shows only a small excerpt of our Flueelling research. Another 127 words (9 lines of text) covering the years 1066, 1500, 1380 and 1415 are included under the topic Early Flueelling History in all our PDF Extended History products and printed products wherever possible.

There are relatively few surnames native to Wales, but they have an inordinately large number of spelling variations. Early variations of Welsh surnames can be explained by the fact that very few people in the early Middle Ages were literate. Priests and the few other literate people were responsible for recording names in official documents. And because most people could not specific how to properly record their names it was up to the individual recorder of that time to determine how a spoken name should be recorded. Variations due to the imprecise or improper recording of a name continued later in history when names originally composed in the Brythonic Celtic, language of Wales, known by natives as Cymraeg, were transliterated into English. Welsh names that were documented in English often changed dramatically since the native language of Wales, which was highly inflected, did not copy well. Occasionally, however, spelling variations were carried out according to an individual's specific design: a branch loyalty within the family, a religious adherence, or even patriotic affiliations could be indicated by minor variations. The spelling variations of the name Flueelling have included Flewelling, Flewellen, Llewellen, Llewillan, Llewellyn, Alewellyin, Flewellyn, Flywillan, Fleuellan, Llewallin, Llewallyn, Flewellan, Flewellin, Llewellan, Lewellin, Lewellen, Lewillan, Lewellyn, Lywellen, Lywellin, Lewallin and many more.

Prominent amongst the family during the late Middle Ages was Sir Dafydd ap Llewelyn ap Hywel (c. 1380-1415), better known as Dafydd Gam or Davy Gam, a Welsh medieval...
Another 28 words (2 lines of text) are included under the topic Early Flueelling Notables in all our PDF Extended History products and printed products wherever possible.

Migration of the Flueelling family

North America in the 1800s and 1900s saw the arrival of many Welsh people hoping to share in the wealth of land, work, and freedom that they felt North America held. Those who made the journey often attained those expectations, but only through an enormous amount of hard work, perseverance, and often a bout of good luck. These immigrants helped contribute to the growth of industry, commerce, and culture of both Canada and the United States. Discovered in the immigration and passenger lists were a number of people bearing the name Flueelling: Ann Flewelling who purchased land in Virginia in 1643 and in the same year Thomas Flewelling settled in a nearby piece of property.