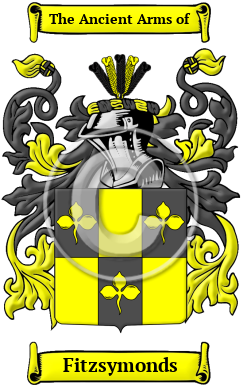 The notable Fitzsymonds family arose among the Cornish People, a race with a rich Celtic heritage and an indomitable fighting spirit who inhabited the southwest of England. While surnames were well-known during the English medieval period, Cornish People originally used only a single name. The way in which hereditary surnames came into common use is interesting. As the population of medieval Europe multiplied, people began to assume an extra name to avoid confusion and to further identify themselves. Under the Feudal System of government, surnames evolved and they often reflected life on the manor and in the field. Patronymic surnames were derived from given names and were the predominant type of surname among the Celtic peoples of Britain. However, the people of Cornwall provide a surprising exception to this rule, and patronymic surnames are less common among them than other people of Celtic stock, such as their Welsh neighbors. This is due to the greater influence of English bureaucracy and naming practices in Cornwall at the time that surnames first arose. This type of surname blended perfectly with the prevailing Feudal System. One feature that is occasionally found in Cornish surnames of this type is the suffix -oe or -ow; this is derived from the Cornish plural suffix -ow. is a patronymic surname that came from the ancient Hebrew personal name Shimon, meaning to hearken.

Early Origins of the Fitzsymonds family

The surname Fitzsymonds was first found in Devon and in Cornwall, where the family held a family seat since ancient times.

Simeon or Symeon of Durham ( fl. 1130), was an English historian, a monk of Durham, being thirty-eighth on his own list of the monks of that house. Saint Simeon Stock (1165?-1265), was general of the Carmelite friars and is said to have been born in Kent of noble parents about 1165. "From his earliest years he was devoted to religion, and, according to the legend, owed his surname to the fact that from his twelfth year he lived a hermit's life in the trunk or stock of a tree for twenty years. " [1]

Early History of the Fitzsymonds family

Notable amongst the family at this time was John Symons, M.P. for Helston in 1388; Thomas Simon (c. 1623-1665), English medalist, born in Yorkshire who studied engraving under Nicholas Briot; Samuel Simmons (1640-1687), an English printer, best known as the first publisher of several works by John Milton; Abraham Simon (1617-1692?), an English medalist to the Royal Mint with his brother, Thomas Simon (c. 1623-1665); and Richard Symonds (1617-1692?), an English Royalist and antiquary, best known for his eye-witness diary of the events of the First English Civil War. Sir George Simeon was an English landowner and politician, Member of Parliament...
Another 114 words (8 lines of text) are included under the topic Early Fitzsymonds Notables in all our PDF Extended History products and printed products wherever possible.

Migration of the Fitzsymonds family to Ireland

Some of the Fitzsymonds family moved to Ireland, but this topic is not covered in this excerpt.
Another 62 words (4 lines of text) about their life in Ireland is included in all our PDF Extended History products and printed products wherever possible.

Migration of the Fitzsymonds family