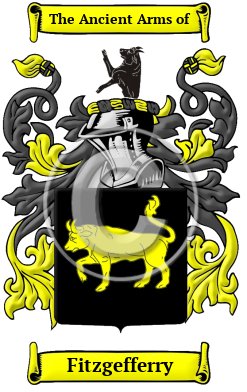 Early Origins of the Fitzgefferry family

The surname Fitzgefferry was first found in Bedfordshire (Old English: Bedanfordscir), located in Southeast-central England, formerly part of the Anglo-Saxon kingdom of Mercia, where they held a family seat as Lords of the Manor. After the Battle of Hastings in 1066, William, Duke of Normandy, having prevailed over King Harold, granted most of Britain to his many victorious Barons. It was not uncommon to find a Baron, or a Bishop, with 60 or more Lordships scattered throughout the country. These he gave to his sons, nephews and other junior lines of his family and they became known as under-tenants. They adopted the Norman system of surnames which identified the under-tenant with his holdings so as to distinguish him from the senior stem of the family. After many rebellious wars between his Barons, Duke William, commissioned a census of all England to determine in 1086, settling once and for all, who held which land. He called the census the Domesday Book, [1] indicating that those holders registered would hold the land until the end of time. Hence, conjecturally, the surname is descended from the tenant of the lands of Blackburn Hall in Bedfordshire who was recorded in the Domesday Book census of 1086. Sir John Fitzgeoffrey was one of the Barons who rebelled against King John and was at Runnymede in 1215 at the signing of the Magna Carta.

Early History of the Fitzgefferry family

This web page shows only a small excerpt of our Fitzgefferry research. Another 70 words (5 lines of text) covering the years 1511, 1575, 1638, 1575, 1617 and 1611 are included under the topic Early Fitzgefferry History in all our PDF Extended History products and printed products wherever possible.

Norman surnames are characterized by a multitude of spelling variations. The frequent changes in surnames are largely due to the fact that the Old and Middle English languages lacked definite spelling rules. The introduction of Norman French to England, as well as the official court languages of Latin and French, also had pronounced influences on the spelling of surnames. Since medieval scribes and church officials recorded names as they sounded, rather than adhering to any specific spelling rules, it was common to find the same individual referred to with different spellings. The name has been spelled FitzGefferey, FitzGeofferey, FitzGeferey, FitzGeffrey, FitzGeoffry, FitzGeoffrey and many more.

Outstanding amongst the family at this time was Charles Fitzgeffrey (1575?-1638), Cornish poet and divine, born at Fowey in Cornwall about 1575, son of Alexander Fitzgeffrey, a clergyman who had migrated from Bedfordshire. [2] Henry Fitzgeffrey (fl. 1617), English writer of satires and epigrams, "is commonly assumed to...
Another 47 words (3 lines of text) are included under the topic Early Fitzgefferry Notables in all our PDF Extended History products and printed products wherever possible.

Migration of the Fitzgefferry family

Many English families emigrated to North American colonies in order to escape the political chaos in Britain at this time. Unfortunately, many English families made the trip to the New World under extremely harsh conditions. Overcrowding on the ships caused the majority of the immigrants to arrive diseased, famished, and destitute from the long journey across the stormy Atlantic. Despite these hardships, many of the families prospered and went on to make invaluable contributions to the development of the cultures of the United States and Canada. Early North American immigration records have revealed a number of people bearing the name Fitzgefferry or a variant listed above: George Fitzgeffrey, who arrived in Virginia in 1623; and William Fitzgeffrey, who arrived in Virginia in 1623.