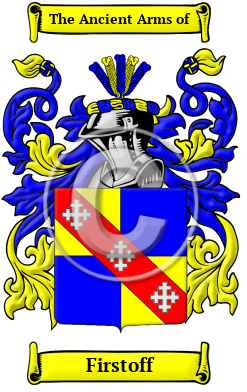 Early Origins of the Firstoff family

The surname Firstoff was first found in Norfolk at the coastal town of Yarmouth (Great Yarmouth.) Fastolf was listed in the Domesday Book of 1086 and later in 1291, Alexander, and William Fastolf were listed in the Feet of Fines of Suffolk. [1] Thomas Fastolf of Reedham and Great Yarmouth was one of the first records of the name. He was father to Nicholas Fastolf (died 1330), an English judge who is generally thought to have been the first judge to hold the office of Lord Chief Justice of Ireland and Thomas Fastolf (Fastolfe) who died in 1361, an English canon lawyer and Bishop of St David's.

Early History of the Firstoff family

This web page shows only a small excerpt of our Firstoff research. Another 73 words (5 lines of text) covering the years 1352, 1361, 1380 and 1459 are included under the topic Early Firstoff History in all our PDF Extended History products and printed products wherever possible.

Spelling variations in names were a common occurrence before English spelling was standardized a few hundred years ago. In the Middle Ages, even the literate spelled their names differently as the English language incorporated elements of French, Latin, and other European languages. Many variations of the name Firstoff have been found, including Fastalf, Fastoff, Fastolf, Fastoff, Fastolfe and others.

Distinguished members of the family include Sir John Fastolf of Caister-on-Sea; and his son, Sir John Fastolf KG (1380-1459), an English knight during the Hundred Years War, inspiration for Shakespeare's Sir John Falstaff. For his efforts in France, he was...
Another 40 words (3 lines of text) are included under the topic Early Firstoff Notables in all our PDF Extended History products and printed products wherever possible.

Migration of the Firstoff family

Families began migrating abroad in enormous numbers because of the political and religious discontent in England. Often faced with persecution and starvation in England, the possibilities of the New World attracted many English people. Although the ocean trips took many lives, those who did get to North America were instrumental in building the necessary groundwork for what would become for new powerful nations. Some of the first immigrants to cross the Atlantic and come to North America bore the name Firstoff, or a variant listed above: the name represented in many forms and recorded from the mid 17th century in the great migration from Europe. Migrants settled in the eastern seaboard from Newfoundland, to Maine, to Virginia, the Carolinas, and to the islands..