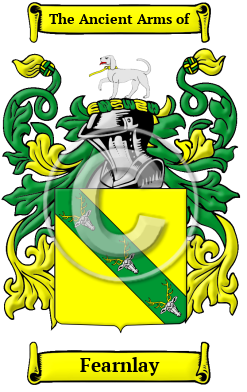 Early Origins of the Fearnlay family

The surname Fearnlay was first found in Farnley, a village and civil parish in the Harrogate district of North Yorkshire. This place name dates back to c. 1030 and was originally spelt Fernleage eluding to its Saxon heritage. There were three listings of separate villages in the Domesday Book of 1086: Fernelai; Fernelei; and Fereleia. [1] All were in the same area of Yorkshire. There are two Farnley Halls each with different origins but neither were held by the Fearnlay family. Alternatively, the name could have originated in Derbyshire at Fernilee, a township, in the parish of Hope, union of Chapel-en-le-Frith, hundred of High-Peak that was originally spelt Ferneley in the 12th century. Both place names literally mean "woodland clearing where ferns grow," from the Old English words "fearn" + "leah." [2] Some of the first records of the name include: Hugh de Fernlee who was listed in the Curia Regis Rolls of Worcestershire in 1206; and Hugh de Fernelay who was listed in Yorkshire in 1316. [3] The Yorkshire Poll Tax Rolls of 1379 had the following entries: Johannes de Farnelay, living at Fernelay; Johannes de Fernelee; Margeria de Fernelee; and Johanna de Ferenlowe. [4]

Early History of the Fearnlay family

This web page shows only a small excerpt of our Fearnlay research. Another 36 words (3 lines of text) are included under the topic Early Fearnlay History in all our PDF Extended History products and printed products wherever possible.

It is only in the last few hundred years that the English language has been standardized. For that reason, early Anglo-Saxon surnames like Fearnlay are characterized by many spelling variations. As the English language changed and incorporated elements of other European languages, even literate people changed the spelling of their names. Scribes and monks in the Middle Ages spelled names they sounded, so it is common to find several variations that refer to a single person. The variations of the name Fearnlay include: Fearnley, Fernlie, Fernley and others.

More information is included under the topic Early Fearnlay Notables in all our PDF Extended History products and printed products wherever possible.

Migration of the Fearnlay family

Many English families tired of political and religious strife left Britain for the new colonies in North America. Although the trip itself offered no relief - conditions on the ships were extremely cramped, and many travelers arrived diseased, starving, and destitute - these immigrants believed the opportunities that awaited them were worth the risks. Once in the colonies, many of the families did indeed prosper and, in turn, made significant contributions to the culture and economies of the growing colonies. An inquiry into the early roots of North American families has revealed a number of immigrants bearing the name Fearnlay or a variant listed above: Thomas Fernley who settled in Virginia in 1623; James, John and Thomas Fernley all arrived in Philadelphia between 1840 and 1860.