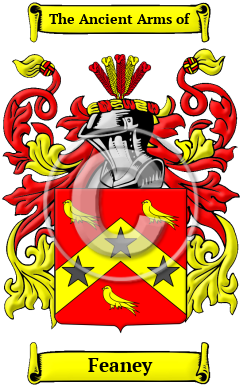 The name Feaney originally appeared in Gaelic as O Fiannaidhe. This name, which was O Feinneadha in its earlier form, refers to a soldier.

Early Origins of the Feaney family

The surname Feaney was first found in Galway (Irish: Gaillimh) part of the province of Connacht, located on the west coast of the Island, where they held a family seat from very ancient times, and where their territories were Ballyfeeney and in Roscommon. Moving north into Ulster the name became Finney. This branch also moved into southwest Scotland from about the 15th century.

Early History of the Feaney family

This web page shows only a small excerpt of our Feaney research. Another 98 words (7 lines of text) covering the years 1509, 1541, 1551, 1640, and 1678 are included under the topic Early Feaney History in all our PDF Extended History products and printed products wherever possible.

The recording of names in Ireland in the Middle Ages was an inconsistent endeavor at best. The many regional dialects and the predominate illiteracy would have made common surnames appear unrelated to the scribes of the period. Research into the name Feaney revealed spelling variations, including Finney, Feeney, Finnay, Finny, Fynnie, Fynney, Feenay, Feeny, Feaney, Feanay, Feany and many more.

More information is included under the topic Early Feaney Notables in all our PDF Extended History products and printed products wherever possible.

Feaney Settlers in Australia in the 19th Century