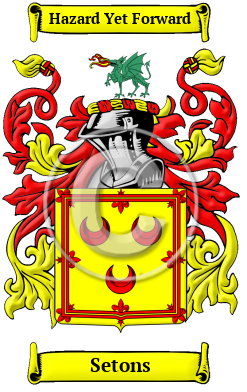 This Clan was first found in East Lothian where they were granted lands by Earl David, King of Scotland and were recorded as a family of great antiquity seated on the lands of Saytown in that shire. They were originally from Say near Exmes in Normandy. The name probably once meant 'sea town.' [1]

Early Origins of the Setons family

The surname Setons was first found in East Lothian, where they were granted lands by Earl David, King of Scotland. The township of Seaton in the East Risding of Yorkshire was home to another branch of the family. "This place, in Domesday Book called Setton, at an early period gave name to a resident family; and in the thirteenth century, the abbey of Meaux received a grant of some property here." [2]

North Seaton has similarly the same lineage. "This place appears to have been at an early period in the possession of the Seaton family, and in the thirteenth century part was owned by the priory of Tynemouth and the hospital of St. John of Jerusalem." [2]

One of the more interesting early records of the family was Sir Alexander Seton ( fl. 1311-1340), keeper of Berwick, probably a brother of Sir Christopher Seton. "His name is found among those of the Scottish nobles who, in 1320, signed the letter to the pope asserting the independence of Scotland. From Robert I he received the manor of Tranent and other lands, as well as the fortalice and lands of Fawside." [3]

His brother, the aforementioned Sir Christopher Seton (1278?-1306), was a close friend of Robert the Bruce.

Early History of the Setons family

Spelling variations of this family name include: Seaton, Seton, Sayton and others.

Notable among the family at this time was Alexander Seaton (1626-1649), Scottish mercenary in Danish service during the Thirty Years' War. He served as a governor in the Battle of Stralsund and as an admiral in the Torstenson War; The Reverend Thomas Seaton (baptised 1684-1741), Church of England clergyman and religious writer; George Seton IV, 6th Lord Seton (died 1549); George Seton V, 7th Lord Seton (1531-1586), Lord of the Parliament of Scotland, Master of the Household of Mary, Queen of Scots and Provost of Edinburgh; Alexander Seton, 1st Earl of Dunfermline (1555-1622), a Scottish lawyer, judge and politician...
Another 98 words (7 lines of text) are included under the topic Early Setons Notables in all our PDF Extended History products and printed products wherever possible.

Migration of the Setons family to Ireland

Some of the Setons family moved to Ireland, but this topic is not covered in this excerpt.
Another 50 words (4 lines of text) about their life in Ireland is included in all our PDF Extended History products and printed products wherever possible.

Setons migration to the United States +

Setons Settlers in United States in the 18th Century