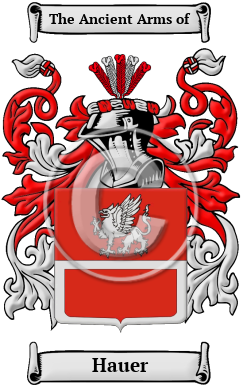 The surname Hauer, comes from the German word "Heu" meaning "hay." The name is occupational in origin, especially so, when it serves as an element in a compound. Heumaier would refer to the officer who oversaw the delivery of the hay harvest. Heuwemenger is the equivalent of "Heuhändler" meaning hey merchant. The surname Hauer on its own would likely be applied to a hay farmer or cutter.

Early Origins of the Hauer family

The surname Hauer was first found in what are now Germany and Switzerland, where the earliest mentions of the name include Cunrat der Hewer in Württemberg in 1329, Heu in Konstanz, Hauwemenger in Frankfurt in 1387, and Heurechen in Zürich in 1400. The name could also be found in Bohemia and Moravia in the 14th Century, especially within compound names, such as Heuleiter, Heureufel, Heubüschl, Heuteuer, and Heuradem.

Early History of the Hauer family

This web page shows only a small excerpt of our Hauer research. Another 70 words (5 lines of text) covering the years 1510, 1574, and 1589 are included under the topic Early Hauer History in all our PDF Extended History products and printed products wherever possible.

Another 39 words (3 lines of text) are included under the topic Early Hauer Notables in all our PDF Extended History products and printed products wherever possible.

Hauer migration to the United States +

Hauer Settlers in United States in the 18th Century

Hauer Settlers in United States in the 19th Century

Historic Events for the Hauer family +