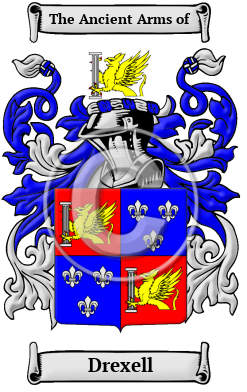 The distinguished surname Drexell is of German origin. It is derived from the Middle High German "Drehseler," meaning "turner," and was most likely initially borne by a turner or lathe worker.

Early Origins of the Drexell family

The surname Drexell was first found in the region of Thuringia, where this particular variation first emerged. The earliest recorded bearer of the name was Herman der Drahsil, who was living in Weingarten, a town just beyond the borders of Thuringia, in 1270. The Drexell family was an integral part of a feudal society which would shape modern European history, and played an important role in the development of German society.

Early History of the Drexell family

This web page shows only a small excerpt of our Drexell research. Another 136 words (10 lines of text) covering the years 1320, 1367, 1414, and 1591 are included under the topic Early Drexell History in all our PDF Extended History products and printed products wherever possible.

More information is included under the topic Early Drexell Notables in all our PDF Extended History products and printed products wherever possible.

Migration of the Drexell family

Some of the first settlers of this family name or some of its variants were: Anna Juditha Drexler, who emigrated from Rhineland to Philadelphia in 1751; Peter Drexler, who was working as a servant in New Jersey in 1771; David Trexler, who settled in Pennsylvania in 1805.